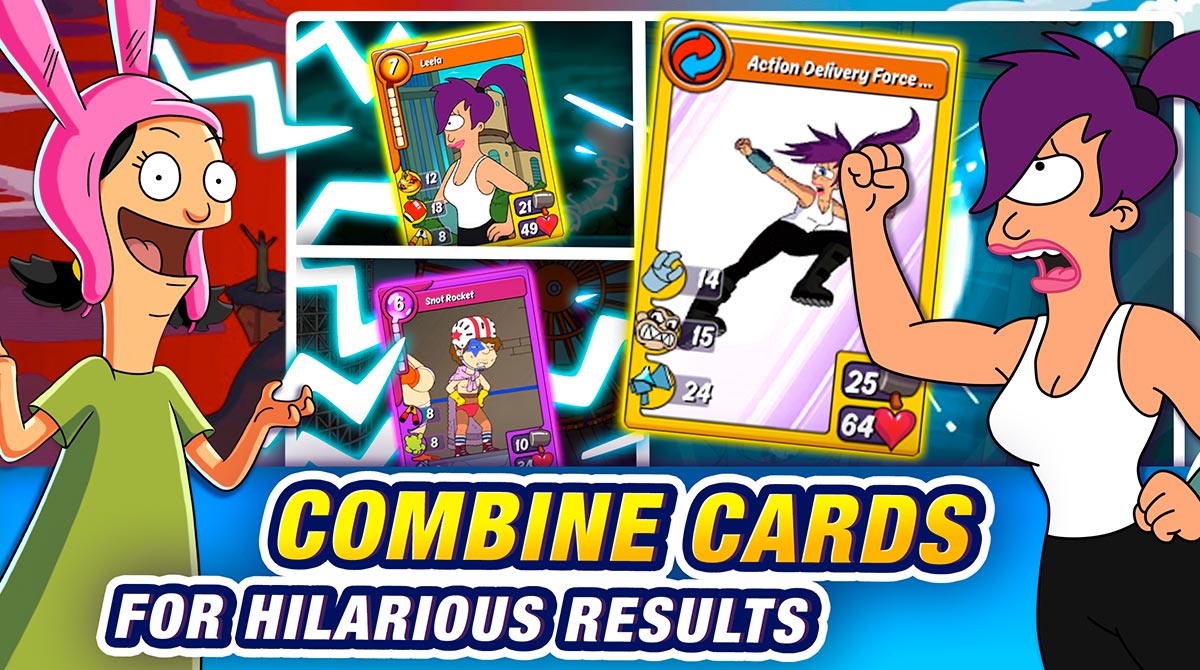 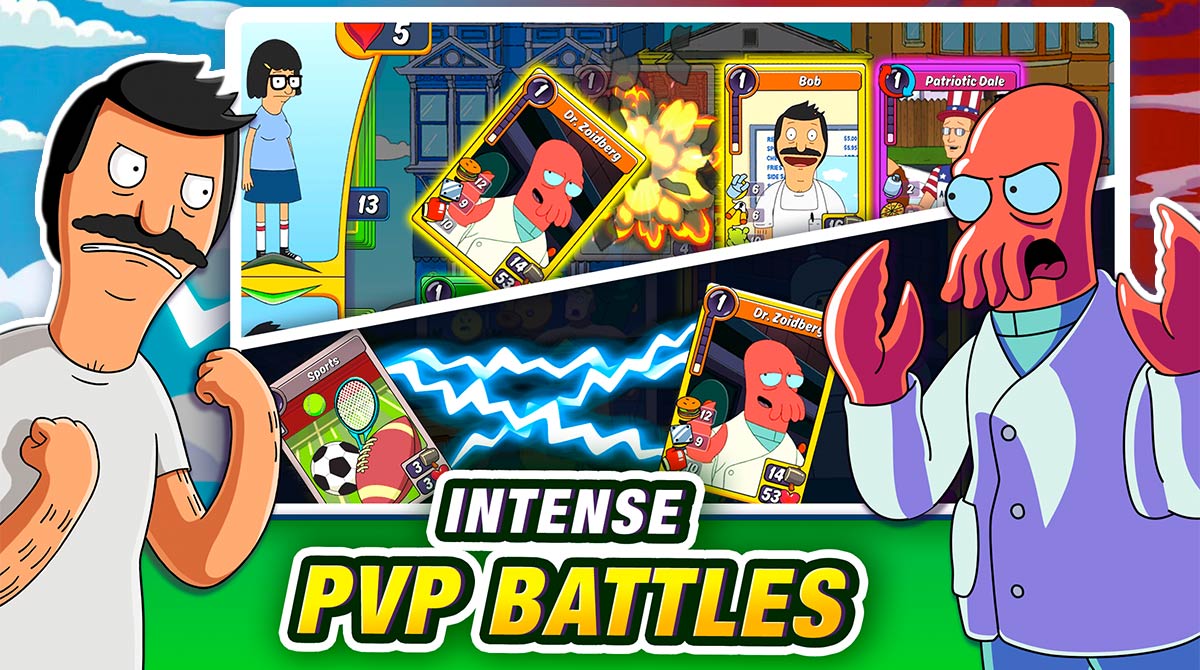 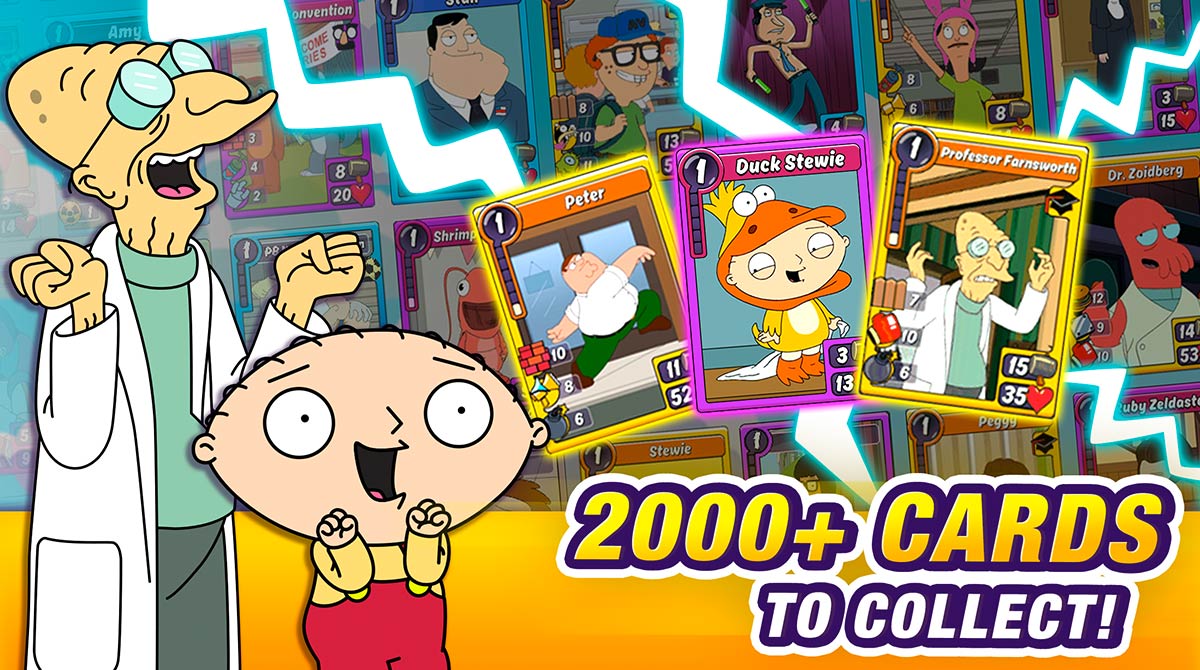 Jump into the wacky world of cartoons and compete against your favorite characters in Animation Throwdown for PC. Unleash your collectible card skills and dominate the world of animation at the comfort of your computer. Strategize and become the king of Animation Throwdown today! Collect All The Popular Comedic Characters

Animation Throwdown is a freemium collectible card game developed and published by Kongregate for mobile devices in 2016. The game features some of the most iconic cartoon franchises in modern pop culture. This mash-up features characters from Family Guy, Futurama, American Dad, King of the Hill, and Bob’s Burgers. The game allows players to collect, upgrade and fuse character and item cards based on the featured cartoons.

Each card comes with its unique attributes, effects, and rarities. Using their card collection, players can build decks that they can use to battle their favorite cartoon characters in Story Mode or their friends in Duels. The game also allows players to create or join a guild and participate in the weekly Guild Wars. As an officially licensed game, you can expect familiar dialogues and iconic one-liners from the characters themselves.

To experience the hilariously challenging Animation Throwdown gameplay, you need to have the PC-Optimized version installed on your computer. You can do this by following the download instructions highlighted on this page. A thumbnail icon of the game will pop up on your desktop that you can use to open the application. Like most games based on TV series or movies, Animation Throwdown starts with a cinematic introduction featuring Futurama’s Professor Farnsworth. The short introduction will provide you with an overview of the events that led to the fusion of the five animated series.

After the intro, the game will introduce you to Peter Griffin from Family Guy who will teach you the mechanics. Peter will do a step-by-step hands-on tutorial focusing on the basic rules in card battles. The great thing about Animation Throwdown is that it provides a straightforward explanation of each of the game’s elements. By the time you complete the tutorial, you will know the basics of the game like the palm of your hand. So what are you waiting for? Download and play the Animation Throwdown free on your PC today.

Enjoy more awesome adventure games that you can download on PC for free. Play fun titles like Caveman Adventure or Rescue The Lover. Download our EmulatorPC app for a seamless and optimized PC gaming experience. 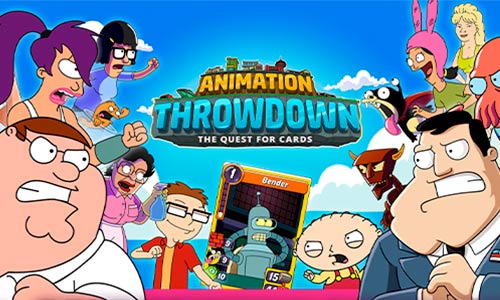 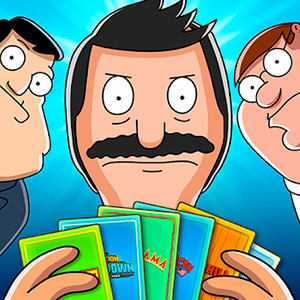 All Animation Throwdown: The Collectible Card Game materials are copyrights of Kongregate. Our software is not developed by or affiliated with Kongregate.