10 Empires and Allies Tips – Win Battles & Improve Your Base If you are good at playing strategy games, you might test out your skills on Zynga’s Empires and Allies. This game depicts a Farmville theme strategy game, less the humorous graphics, but more on military approach. Another game that best describes Empire and Allies is the Clash of Clans. If you are familiar with COC’s standard real-time strategy aspects, you will surely know how E&A works, adding the exciting gameplay elements. These Empires and Allies Tips will help you understand its gameplay.

To cut a long story short, Empire and Allies is a modernized military strategy game that requires players to develop the best tactics to conquer battles, including laying out the base right. So, how will you do that? Let these Empire and Allies tips and strategies help you!

Here is the list of relevant Empire and Allies guides you must not miss checking for;

Once you start playing Empire and Allies, you will witness that your opponent will try to destroy your base, specifically the defensive structures, by firing Hellfire missiles or A-10s. Generally, you can’t stop the damage, but you can at least minimize it by strategically placing your defensive buildings. To minimize the damage, you need to ensure that your towers are not too close to each other, but don’t too far away either. Tactically, it is more recommended that you place your defensive buildings on all four corners of your base and place some inside the base closer to the HQ.

To win battles in Empires and Allies, you have to make sure that your base is well-guarded. It is more tactical to do more domed defenses to guard the base. Usually, a dome defense includes structures with various types of weapons such as aerial defense, air/ground autocannon, and laser beams. Take note that it is better to place defensive structures than guard towers because all long-range arsenals are inside an armored structure. Remember to max out the defensive structures at standard intervals. 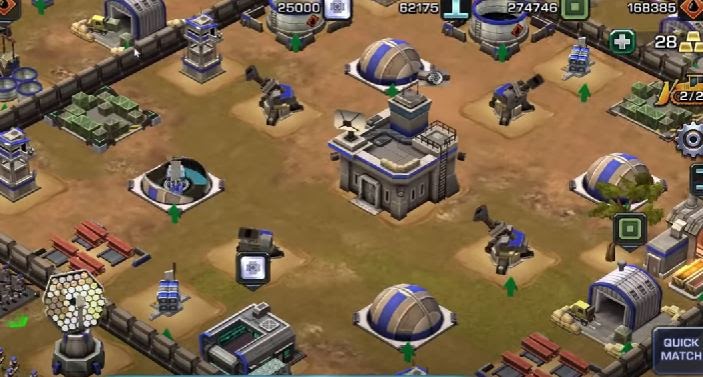 Once your defenses are established, you need to know their attack range by simply clicking the white circle. Make sure that range covers all parts of your base by tactically placing your towers by merely dragging them in a strategic location. A rightful layout of a competitive base is through placing towers in all directions. As you progress through the game and upgrade your HQ, you will get a chance to access more potent defenses on air and land, namely, Metal Rain, Rai Gun, Artillery, and Patriot.

4. Create Walls to Secure Your HQ & Other Vital Buildings

Aside from strategically locating your defensive structures, you also need to support them by building more walls. Though walls are cheap, you can still count on them in protecting your base. These walls can help you protect your HQ significantly if you upgrade them. Keep in mind that your main priority is to secure the HQ, and you must spend at all costs to make your base secure enough.

To set your guards on patrol, you need to establish two rally flags. These flags, from one flag to flag, will strike anyone who wishes to invade the base. To turn your rally flags competitive, you need them in motion and tactically place them close to the HQ or one flag in each corner. If you want to increase the troop capacity, it is best to upgrade your rally flags.

If you are planning to attack a certain enemy’s base, it is best to check out their strength by utilizing the satellite fee. Through a satellite feed, you can see from a bird’s eye the health and the building’s level of your opponent. From there, you can come up with a more effective strategy on where to attack first.

To win battles, you have to keep in mind that it is essential to maximize the construction of your Troop tarmac. Also, it is significant if you can upgrade your troops to the optimum level before deploying them in a battle. It is highly recommended to mix your rangers with the ground and air vehicles. If you want to know your unit’s abilities and downfalls, you can access their information through clicking the Troop Tarmac, then Soldier Icon, and clicking the “i” button, which serves as the information button.

Generally, you are only designated to launch three common points whenever a battle starts. But did you know that you can get more command points? Yes, to do it, you need to navigate the “Weapons Command”, then from there, you need to click on the upgrade icon. However, you need first to upgrade your weapon command and your HQ.

Most of the time, AI-controlled bases have only narrow land where you can situate your troops. Hence, as for human-controlled enemy bases, their deploy zones are broad and reachable even inside the base. If you are battling against another player, it is best to know first your deploy zones by clicking the troop pictures. Once the deploy zones are highlighted, it’s time to choose where to deploy your troops first. It is strategically to locate troops in areas where defensive structures are not or not heavily guarded.

Flares are useful options that require you a single command point during battles. However, you need to know how to use them properly. Whenever your troops destroy a building, they will automatically move to the closest facility and attack it. But, there are times that there are secured buildings with a defensive structure that can bring loads of fatalities. In case this situation happens, it is best to use flares. From there, flares can command troops on a safer spot or other weaker buildings like revenue-generating buildings before those stronger ones.

So, that sums up our Empire and Allies tips! We hope that this guide and tips help you a lot in winning battles and how to set your base. For more updates and information about this strategy game, feel free to visit us here.

Hamster Town Review – Is it a Game Worth Downloading & Playing?