Whether you’re a fan of RPGs and hero gacha games or anime and chibis, Blue Archive is something that you can be excited about. Blue Archive is probably one of the most hyped hero gacha RPG games from Nexon Company. It created so much buzz that it had over 1 million pre-registrations prior to its release on February 4, 2021.

Although the game is currently in its second year, it is still not too late for you to play this game and actually do well. So, whether you are just starting out in this game or are currently playing this game for quite some time, we are here to help you out.

In this list, we will be ranking the heroes per class. We will have S-tier, A-tier, B-tier, and C-tier characters in each class. Firstly, the S-tier characters are those that we consider overpowered. These characters can help carry your team as you progress further in the game. If you find one, then be sure to make them part of your core characters and focus your resources on them.

Next, the A-tier is just a notch below the top-tier characters. These characters are said to be powerful enough to be considered as part of your team. In fact, you can choose to build a well-balanced team of A-tier characters and do very well in this game.

Lastly, C-tier heroes are those who we think are the weakest characters in the game. You can still use them at the start of the game but be sure to replace them immediately as possible. So, without further ado, here is our list of the best Blue Archive characters ranked per class.

Attackers are your main damage dealers. They are probably the most exciting characters to keep on your team as they are the ones who dish out the most amount of damage. It is important to have strong attackers to defeat the enemies right away and quickly clear more levels.

Although the healer class characters are not the flashiest heroes in your team, still, they are vital for the survival of your whole squad. This is because they are the ones that support your character’s HP by healing them. So, be sure to add a strong healer to your team if you want to survive at higher levels.

Next is the support class which is also known to be another underappreciated class that many players overlook. However, just like the healers, they also play an essential role in your team. They are the ones who increase the strength of the whole team through buffs.

Tanks are your team’s shields. They are your front liners who absorb the brunt of the enemies’ attacks in order to protect other characters with weaker defenses. As such, tanks are also vital for your team’s survival. 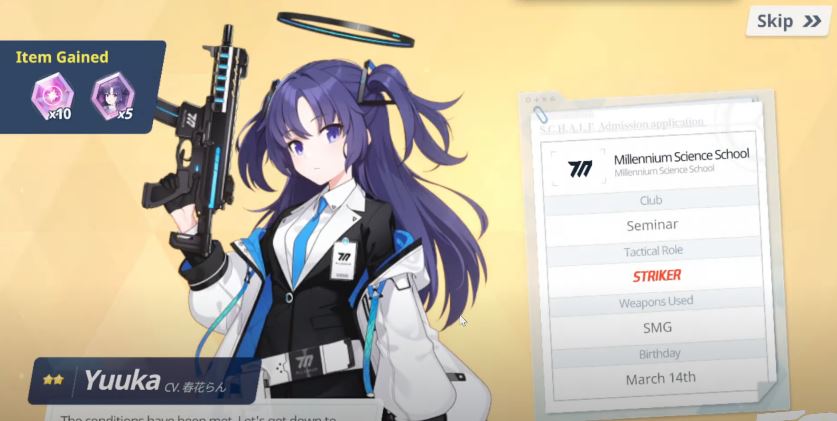 Now that we have given you our tier list, let us move forward to the next best thing – the reroll guide. This way you can put this tier list to good use and get the best characters as you start the game.

Blue Archive is pretty benevolent when it comes to giving you free characters. As you play through the tutorial phase, the game will give you free summons to get your first characters at the start of the game. However, like other hero gacha game, you wouldn’t always be lucky enough to get the best heroes on your first roll in Blue Archive. As such, you might want to reroll your free summons until you get the characters you want. Here is the step-by-step guide you can follow in rerolling in Blue Archive;

If you’re happy with the characters you have on your first roll, then you may stop at step number 7. But, if not, you can continue by following the additional steps below and repeat the process until you achieve the characters you want.

So, there you have it! We hope that this Blue Archive tier list & reroll guide helped you a lot in playing this awesome role-playing game. Put it to good use and get the upper hand as you start playing the game. If you are looking for more tier lists, cheats, tips, & guides, stay tuned here in EmulatorPC.