Brave Nine is a popular turn-based strategy role-playing game released last 2017 by the then-name of Brown Dust. Since then, it has gained a massive following and has released a large number of characters. This Brave Nine tier list ranks all characters based on combat abilities and usefulness in the game’s current meta. Currently, there are dozens of characters, called mercenaries, available with each one having its unique set of skills. Due to this, deciding which characters are the best to deploy to various battles can be difficult.

It doesn’t matter whether you are a newbie or a long-time player just seeking advice on the best mercenaries to use. Being a strategy-based RPG, Brave Nine has lots of depth and tactical challenges that attracted gamers across the world. One of these challenges is deciding which characters to choose.

After its release in 2017 as Brown Dust, this tactical RPG received a major update last March 2020. Since then, it was rebranded to Brave Nine. Despite this change, the game’s premise still remains the same – to collect heroes and form a team to take on various quests and missions. Players can take these mercenaries through an extensive 1400 stages in Story Mode brimming with eye-catching graphics and an immersive storyline.

The battle system is not only enjoyable but also original. Firstly, you need to choose which heroes to deploy and their respective positions. Secondly, you need to adjust each character’s turn. Combining all characters’ skills allows you to create varied strategies. The Campaign Mode is all about gaining victory through each of the 500 levels. While the PVP mode matches you with another real player anywhere around the globe to pit your mercenaries against theirs. To minimize your time figuring out the best, let’s get on with our Brave Nine tier list.

Below is a list of characters you can choose from to form your team of mercenaries.

Ranking Mercenaries from Best to Worst

Over 300 characters divided into 4 main roles – Supporter, Magician, Warrior, and Defender – are obtainable at this time. In this Brave Nine tier list, we will be ranking all available mercenaries based on their overall efficiency. Note that the S-rank consists of heroes that have the best abilities and roles combined. On the other hand, the D-rank includes the worst-performing characters in the game. 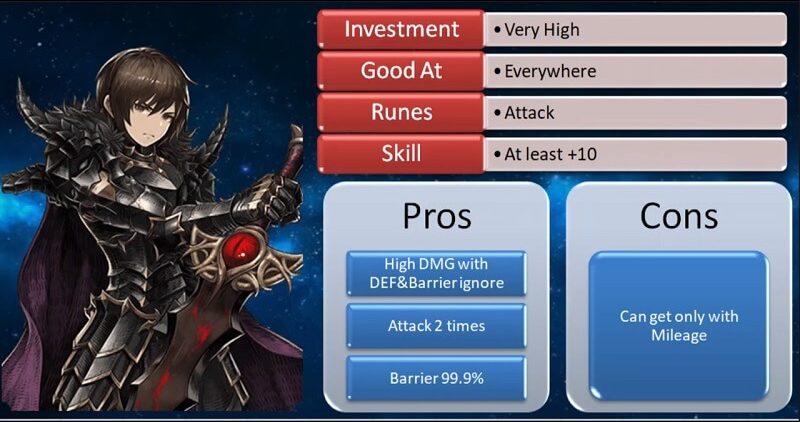 This list includes the best mercenaries, which are overpowered in any team composition. Furthermore, they can single-handedly turn the tides of the battle to their favor. Prioritizing upgrading these heroes before the rest is highly recommended.

Heroes in this tier list may not be as overpowered as the S-rank but they are still powerful in their own rights. Additionally, these characters are still great and very useful in all battles and game modes.

In this rank are mercenaries that have average statistics overall. They are neither great nor the worst. However, they’re still capable of getting quests done and contributing to the team.

Note that the rest of the mercenaries not included in this Brave Nine tier list belong to the lower ranks in terms of proficiency and usefulness in the game’s current meta. But it doesn’t entirely mean that those characters should be taken for naught. However, their contribution to your team in the current meta is considered futile. A Brave Nine ranking list is normally updated whenever there is a new patch release in the game, which is usually once every 2 or 3 months.

Whatever game you’re playing, a tier list is important in the sense that it helps players determine how to spend their time and resources wisely. Additionally, it helps players know about the characters’ respective strengths and weaknesses. You may be wondering what are the advantages of using mercenaries from this Brave Nine tier list. The answer is simple – these characters have the best skills in terms of attack, defense, and support as well as overall utility in battles.

They are perfect for any kind of situation and can produce exemplary results in a majority of cases. On the other hand, lower-tier characters have the weakest statistics and worst usefulness in different circumstances of the game. And while we are at it, take time to check our Blue Archive Tier List and Punishing Gray Raven Tier List as well. For more information about Brave Nine, stay tuned here in EmulatorPC.

Rise of Cultures Cheats – 8 Tips, Tricks & Strategies You Must Know