Monster hunting is a big part of the popular strategy game, Lords Mobile. It’s considered one of the most exciting parts of the game, and this is primarily because it can allow you to get great rewards just for defeating monsters. These rewards can be a big boost to your progress and can help you become stronger. However, many players are still a bit confused about what Monster Hunt is. Fortunately, this blog post will help you since it’s a Lords Mobile Monster Hunt guide. We’ll provide information about it, as well as tips to help you.

What is Monster Hunt in Lords Mobile?

In Lords Mobile’s world map, there are various monsters roaming around. These monsters have levels with the weakest being level 1. To attack these monsters, you need to use your heroes. But you need to form a team of heroes to defeat them since they’re strong, even at just level 1. The reason why you’d want to participate in Monster Hunt is that the defeated monsters will drop great rewards and these can help with your progress in the game.

It’s also important to note that to participate in Monster Hunt, you need to be part of a guild first. The great thing about this is that when a member of your guild kills a monster, all members will get rewards. Likewise, when you kill a monster, all your guild members get rewards as well. The rare items, though, from the drop will always go to the player who killed the monsters. Take note that you can only hunt 1 monster at a time.

It’s also worth remembering that hunting monsters in Lords Mobile require energy. So, don’t expect to be hunting monsters whenever you want. You need to make sure you have enough energy for it. Now that you know what Lords Mobile monster hunting is, let’s move to the different monsters available in the game. 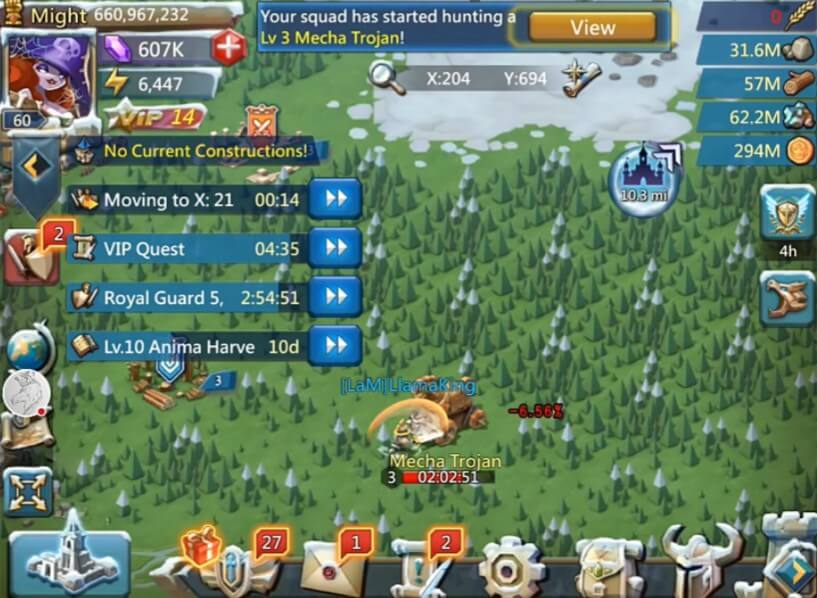 There are a total of 21 monsters in Lords Mobile. Each one is unique and different. These monsters will have advantages, as well as disadvantages.

For monsters like Blackwing, Frostwing, Bon Appeti, Grim Reaper, Gryphon, and Queen Bee, heroes with high agility are going to be an advantage. You can also include Snow Beast, Terrorhorn, Hell Drider, Voodoo Shaman, and Cottageroar. These monsters are weak against agility, so use heroes like Demon Slayer, Black Crow, Tracker, and so on. They’re the ones that are the best heroes to use to deal with these monsters.

Monsters like Gargantua, Hardox, Jade Wyrm, Mecha Trojan, Mega Maggot, Noceros, Saberfang, Tidal Titan, Hootclaw, and Gawrilla, heroes with high intelligence are advantageous. These monsters are weak against intelligence. This means heroes like Incinerator, Sage of Storms, Snow Queen, and so on are the best ones to use against them. Now that you have an idea of the monsters, let’s now move to the tips to help you play.

Monster hunting in Lords Mobile is an exciting and fun activity. And this is primarily because of the rewards that you can get after defeating a monster. In this section, we’ll provide tips to help you do well in this activity.

To hunt monsters, you’ll need energy. Fortunately, there’s a way for you to improve energy usage in the game. First, you need an Academy where you can train the different skills of your heroes. Once you have an Academy, you need to put points on Energy Recovery, Energy Limit, Energy Saver, Monster Hunter I, and Animal Handling. All these skills will help you spend less energy when hunting and make your heroes more efficient in using them. So, make sure you put points in these skills whenever you train your heroes, especially the ones you’ll use for hunting. They’re the ones you need to prepare for monster hunting.

Use the Right Heroes

It’s also important that you use the right heroes that will battle the monsters. As mentioned above, monsters have weaknesses. If you want to defeat them without much issue, then make sure you are using the right heroes for the job. If not, then prepare for a challenging fight that you could even lose, wasting the energy you spent. So, make sure you’re aware of the monsters’ weaknesses so you can use the proper hero for the battle.

Lords Mobile monster hunting is a fun and exciting activity. It’s a way for you to get awesome rewards that can make you strong and help you progress. If you’re having trouble with monster hunting, then just read the information and tips provided above. It will greatly help you do well when hunting the different monsters found on the Lords Mobile world map.