Playing a 5v5 MOBA game like Mobile Legends is not easy to play. You need to have proper skills anchored with the best strategy to win the battle. Even if you feel you’ve got the best and strongest hero, it is still challenging to build their items. Up to date, there are 103 heroes that each player can find in the game.

Each of these heroes plays a different role, and understanding each of these functions will help you better in playing the game. So, if you are a newbie in playing Mobile Legends, you might be too overwhelmed with all the heroes available in the game.

In this Mobile Legends hero guide, we’ll help you ease up your worries and choose the best yet most straightforward heroes to use in the game. The heroes listed below are the best for beginners because of their easy set of skills and abilities. Let’s see all of these best ML heroes for beginners below.

These heroes have been the best heroes every newbie should acquire to play well in Mobile Legends. Aside from the fact that they are easy to use, they have a great unique set of skills and abilities that is helpful for your team’s gameplay.

Layla is one of the pioneer heroes to appear in Mobile Legends. She has been with every player in the tutorial phase, learning about the basic rules and skills in the battleground. Still, even though she’s one of the first heroes, Layla is powerful enough to kill opponents and destroy an enemy’s base with her Malefic Gun. 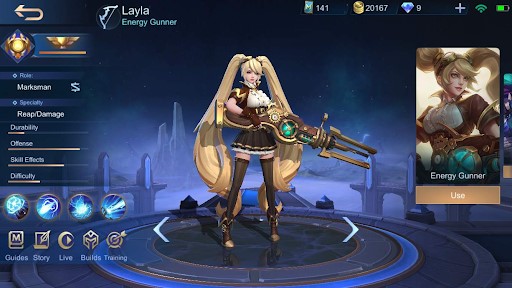 As a marksman, she plays an important role in a team’s gameplay, especially in the “late game” approach. Layla can generate a high amount of damage to enemies and output the scale with her attack range. However, unlike other Marksman heroes, she can only protect herself from the enemy using her skills from a distance. Her passive skill called “keep the distance” enables her to generate huge damage to enemies.

Layla’s simple trick of basic attacks and an ultimate destruction rush will help you kill enemies at one target while enjoying the gameplay. For some, players would tag Layla as a “Kill Steal” hero for stealing enemy kills because of her ultimate skill. With her simple yet powerful and high damage skill, there’s no doubt why Layla is one of the best heroes in Mobile Legends for beginners.

If you are looking for a cute, bubbly, and easy hero to use, then Nana is the best one to get. Nana has been one of the best ML heroes for beginners as she is straightforward to use. Her straightforward skills can deal a huge amount of magic damage and crowd control abilities that can stun enemies.

Also, she has a good escape method through her passive ability. This passive skill makes Nana so unique that it can deal damage during clashes, making it easiest for her to kill an enemy. On the other hand, her second skill enables her to be a great support hero, throwing Molina to a specific area.

When an enemy runs through that space, they will transform into Molina for about 1.5 seconds while reducing their magic damage by 25%. As a mage, Nana is also very easy to use and play. You can handle her in any situation while ranking up quickly in the match.

Young players and newbies would usually go for Nana as their first heroes. There are no complicated skill combinations you need to test. She is very flexible to the point that players can use her as a support or mage for the team.

Another hero for you to learn and try is Eudora. Like Layla and Nana, Eudora is one of the pioneer heroes in Mobile Legends. If you are looking for power like Storm in X-men, then Eudora is the perfect hero for you. She is a mage hero that can deal great burst magic damage in a few seconds. Thus, when playing Eudora, you must be aware of her special passive abilities, which level up skills damage. 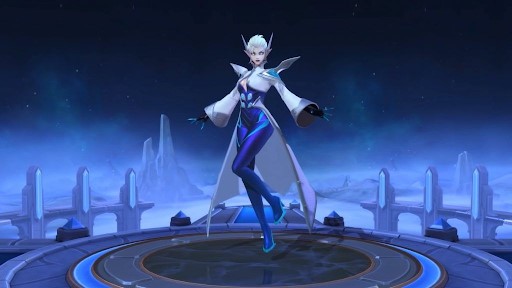 Stunning is one of the most beneficial skill factors of Eudora. She has excellent crowd control skills that enable her to support her allies in attacking enemies. With a simple click of her second skill, she can stun a group of opponents, given that they have the semiconductor mark on them. Please take it as a sign of getting electrified at a single moment.

Moreover, what’s essential in using Eudora is to learn and understand her skills as she gives off high bursts of magic damage to potential enemies. That is because when her second skill is misused, she wouldn’t be able to throw off her ultimate ability to enemies, giving off massive damage to any player.

Another hero fit for beginners is Balmond. This fighter hero is simple to use while dealing a vast amount of damage to your enemy’s skill. Balmond’s unique ability is to recover HP based on his skills through his passive techniques. He is a great hero to use for beginners, as there are no complex skill combinations that players need to deal with in the game. 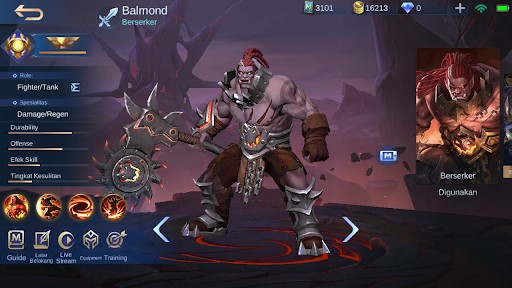 Balmond is also good and helpful in taking down slow-moving enemies. With his “Continuous Damage” as a second skill, enemies can receive an increasing attack base on the number of hits that Balmond produces. Like Eudora, covering how to use the AOE or Area of Effect of Balmond’s second skill will enable your team to take advantage of your opponent’s base. Balmond can damage the turrets and destroy the enemy’s crystal base with only a single hit if appropriately used.

Another Marksman hero that takes the spot for best ML heroes for beginners is Miya. Her skill is very easy to understand and learn, allowing her to deal with multiple enemies all at once. Players who use Miya as a starter hero must focus more on her passive skills. 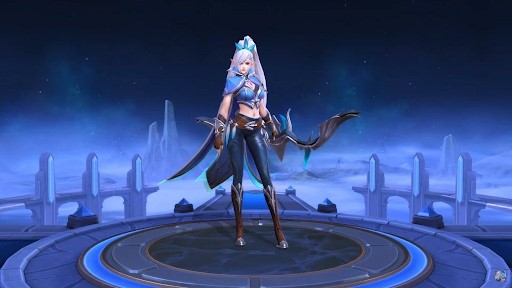 When all of these abilities are set, she can easily cause more damage to enemies with her increased attack speed. Like other heroes, Miya’s ultimate gives her a high advantage of removing all CC and debuff effects from her while concealing herself.

With this basic strategy, you can easily survive an ambush and surprise your enemies to the other side as you attack them. Miya’s skillset is straightforward to manage since there is no accurate timing on what skill to use first. But still, learning her abilities and understanding how her passive skill works will give your team a different kind of advantage.

These top five Mobile Legends heroes are the best ones to get for first-time players. All heroes listed above are guaranteed to give you a great and enjoyable game experience whilst fighting for your team’s base.

If you aim to master a particular hero, start by trying all of these heroes for beginners before moving forward to those with more advanced abilities. Either way, the techniques, and strategies still lie in your hands. If you apply the correct build and approach to fight your enemies in the battleground, you will surely win in the game.