Last 2016, Cheritz published and developed an otome simulation game called Mystic Messenger. Out of loads of simulation games today, this game is very unique because it features loads of characters diversified with unique personalities and attitudes. Therefore, it gives a sufficient balance to the gameplay and offers players more preference. However, before we jump into the Mystic Messenger Characters, let’s first take a quick overview of Mystic Messenger.

In this simulation otome game, you’ll take the role of a female protagonist who will meet five suitors. As you start playing the game, you’ll be set in a messenger-like game setting, and from there, you’ll communicate with different characters. Aside from interacting with your suitors, you’ll also take the role and responsibilities of the late Rika, who used to be one of the hosts of the R.F.A. or so-called Rika’s Fundraising Association. Before she dies, she got the time to manage the list of guests for the upcoming fundraising party, and it’s your time to continue her work. 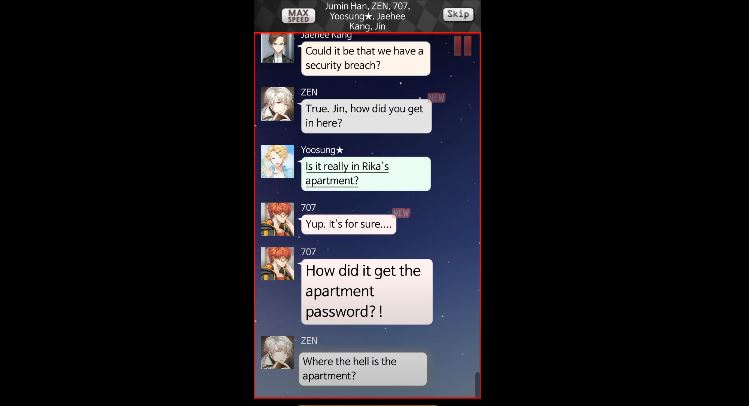 As Rika’s replacement, you need to ensure that the chat room is active, respond to various guest emails, reply to multiple private messages, and even answer phone calls from the organization’s members. You’ll do this routine for less than 11 real-life days. If you’re lucky enough and reach the last day, you’ll witness the grand party. In addition to the errands of Rika, you’ll also need to choose from suitor options. These suitors will lead you to the route of your choice.

Getting to Know the Mystic Messenger Characters

In the first part of the game, you’ll get a chance to interact with Jaehee, Zen, and Yoosung. As you get into the Deep Story, you’ll meet Jumin and 707. So, who are these characters? Which of them can give you a good ending? Let’s now meet the Mystic Messenger Characters. Here’s the list of characters included in this romantic otome game.

Also known as the “MC” or the Heroine or Protagonist of the game. This character is portrayed by the player or “You.” In Mystic Messenger, the main character is a female, and its name depends on your choice. Furthermore, as the MC, you’ll take the general errands of Rika as you accidentally get thrust into the R.F.A. Also, the MC can mingle with one of the five suitors throughout the 11 real-life days. You’ll converse with them, and once you reach the end of the game, you’ll learn the route you’re leading to.

One of the suitor options immediately available as you begin the game is Zen. He’s close to being a successful singer, actor, and dancer. As you come across him, you’ll think of him as narcissistic. Moreover, this character loves posting selfies and claims to have the best handsome face. He loves complimenting and praising himself. Furthermore, he’s very unconventional and provocative as well. 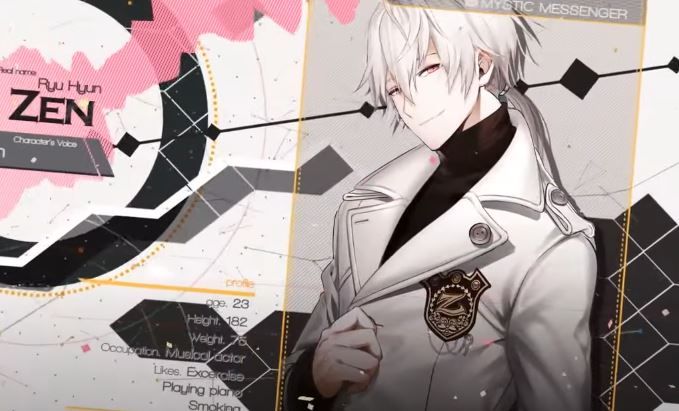 This character is one of the suitor options and is also known as LOLOL. Yoosung is a second-year college student and a cousin of Rika. Furthermore, he prefers playing games more than studying. With the loss of his cousin Rika, Yoosung is profoundly affected and can’t still manage to accept that Rika is already gone. 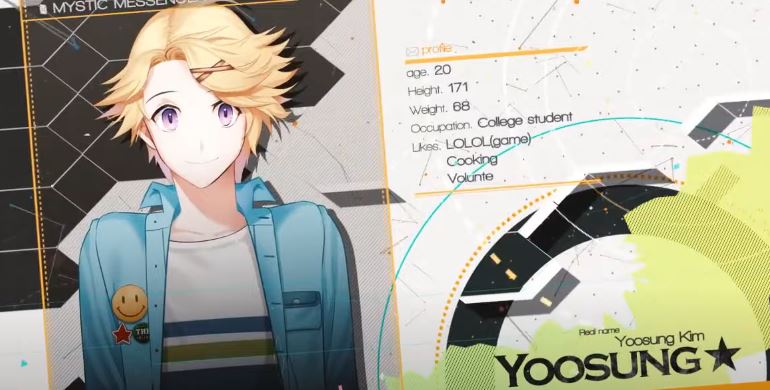 Take note that this suitor option is a female character but with a route. Jaehee is renowned as the chief secretary of Jumin Han of C&R International. She’s known to be a serious and very independent businesswoman. 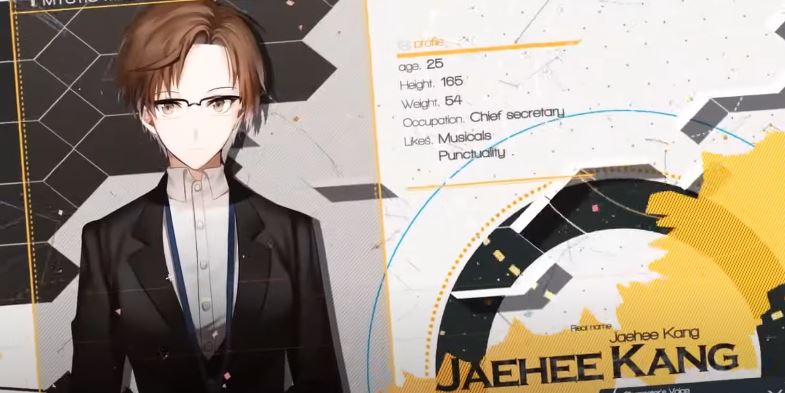 Jumin Han is a suitor option that you can access on the Deep Story. You’ll find Jumin a quiet, cautious, matured, and serious man. Additionally, this character loves making business trips and prefers conversations about maturity and work-related topics. Also, he’s a son of a reputable wealthy family and owns the C&R International company. 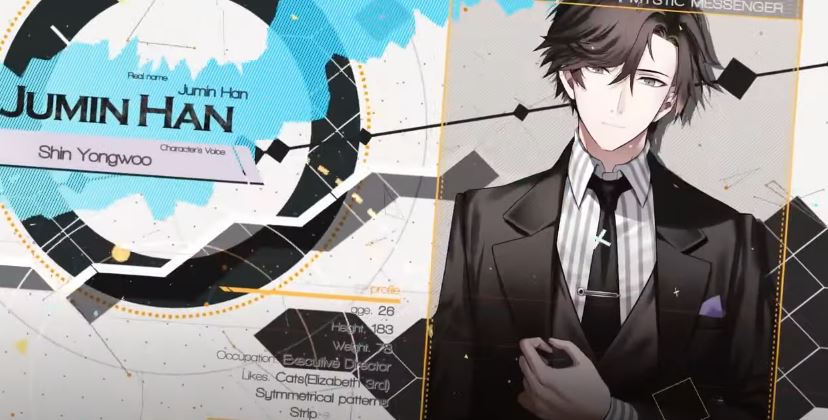 Last but definitely not least, like Jumin, you’ll access 707 in the Deep Story. Also known as Saeyoung Choi, 707 is a renowned hacker who gets any information he wishes to have quickly. In addition, you’ll notice that 707 always pranks Yoosung in the chat room. 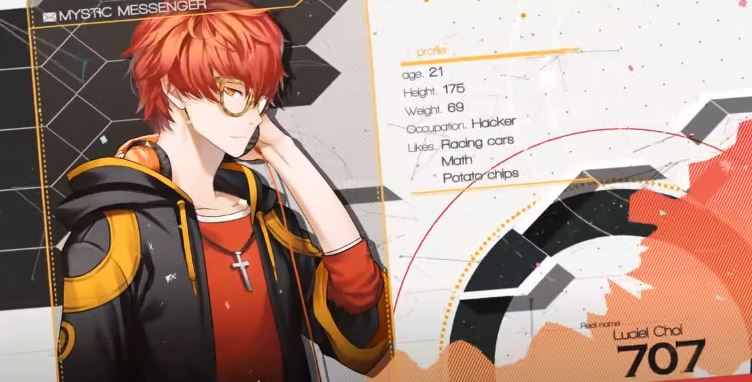 Aside from the suitor options, here are the other Mystic Messenger Characters you’ll encounter in the game;

He’s also one of the heads of the R.F.A with her fiance Rika. You’ll notice this character offline as he is busy on his trips as a photographer. He used to work with the suitor options. Also, V is experiencing depression due to the death of Rika, which you’ll notice immediately. Moreover, he’s also known as a childhood friend of Jumin.

He’s the so-called “Unknown” in the game. Apart from that, he’s one of the main antagonists of Mystic Messenger. Furthermore, he’s an identical twin brother of 707 and an active member of the student organization named Mint Eye. You’ll learn soon that this character is secretly preparing you to join the Mint Eye.

Also known as the Savior. As mentioned above, Rika is one of the founders of R.F.A along with V. However, she died ten months before the main event. This character is seen to have a pretty face along with lean and pale skin.

As you progress in the game, you’ll also get a chance to meet other Mystic Messenger Side Characters, such as;

So, there you have it! We hope that this Mystic Messenger characters guide will help you decide which route to take. If you want to know more about this simulation game, feel free to get an update here in EmulatorPC.