Pixel Gun 3D is one of the exciting first-person action shooting games nowadays. Most of the time, gamers prefer this genre by its unique gameplay and flashy graphics. Others prefer something simple but with a unique presentation, and that’s Pixel Gun 3D. This game depicts heavily inspired graphics to Minecraft. But, instead of a sandbox, it is a first-person shooting game that is more like Call of Duty or NOVA Legacy. The only thing borrowed from Minecraft is its survival mode, where you will fight against the horizon.

In Pixel Gun 3D, there is also a multiplayer mode where you can play with your family and friends and set against other teams. But, you have to keep in your gaming mind that for you or your team to win, you need to use the best weapons in the game.

So, we’ve come with a Guide for Pixel Gun 3D that focuses on the list of the best weapons grouped according to class. To know more about these weapons, stay tuned to this blog.

What are the Pixel Gun 3G guns you should buy?

The weapons in Pixel Gun 3D are into six classes; primary, back-up, melee, special, sniper, and heavy weapons. In this guide, we featured some guns that stand out in each category to improve your gameplay in this FPS game. Here are the pixel gun 3d guns you should buy:

It is a weapon that falls under primary class. You can buy this excellent gun by spending 1450 coins. This rifle can release bullets that can generate ample damage. What is more amazing about this weapon is the bullets travel immediately, meaning you can use this gun for long-range. If you are new to Pixel Gun 3D, this gun is definitely a great choice to start with.

It is another primary class gun, and you can have it for 100 coins. It is a perplexing gun renowned for its fast fire rate and damage. However, this mini gun has low accuracy and mobility.

This gun will definitely strip out your opponents when using this weapon at close range. However, this gun shows some short delay, especially when you hold it for the first fire.

Another great gun you must consider having is the minigun shotgun. To get this gun, you need to exchange it for 1195 coins. Unlike the other weapons in Pixel Gun 3D, this gun depicts a mechanical combination of a shotgun and a minigun.

It fires multiple bullets like a shotgun with an inflated fire rate. However, its mobility is relatively low and can’t create severe damage to opponents located up close. The Mini-gun shotgun best works with short-range enemies.

It is one of the best back-up weapons, and you can have it by spending 565 coins. It is a vibrant gun that offers impressive features such as firing purple particles with quick travel time and area damage.

If you are looking for a weapon that best works in long-range, you better check Dead Star. Hence, you have to expect a short quick delay on your first fire whenever you switch to this weapon.

You can have this Mercenary weapon for only 125 coins. It is a futuristic-inspired weapon that shoots explosive bullets with quick travel time. Whenever you fire a shot, it will release five bullets, and you will achieve decent damage. It is a good weapon whenever you wish to finish off your opponents.

Another best back-up weapon you must buy is the Red Twins. This weapon can be obtained for 65 coins only. As the weapon suggests, two pistols discharge moderate damage at a reasonable fire rate. The stats of this weapon are balanced, making it stand out among other back-up weapons.

It is a 1305 coin melee weapon that is renowned for its effectiveness. Though it fires slowly , the damage is surprisingly massive, making this weapon one of the best weapons in Pixel Gun 3D. In using this weapon, you need to move it like a Yo-Yo, and as it moves, it hits the opponent whenever it is touched. 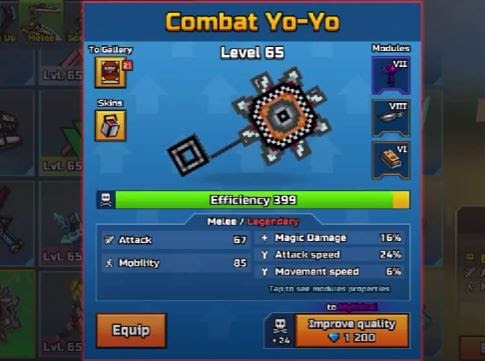 What is more remarkable about this Combat Yo-Yo is that it can surpass even walls as it is geared like a hidden chainsaw and can do various hits. If you are wandering around with a fun weapon to use, you better check this out! !

It is a melee weapon that costs 1485 coins. It is a sword-type weapon that depicts massive damage. With its prominent mobility, it allows you to make effective stealth attacks. This weapon is different because it offers a burning trait wherein the opponent will burn, and in slow time, its health will lose.

Another melee weapon you must consider buying for. You have a Meat Grinder for only 230 coins. This weapon is best for close-range enemies. It can create continuous damage once the trigger is activated. It is an excellent weapon for grouped enemies and is known for its bleeding trait wherein the opponent slowly bleeds out and health drops.

It is a special weapon that costs 1080 coins. Laser Bouncer is a laboratory-inspired weapon that discharges orange lasers that can spike the opponents and bounce off the walls. Through the fire rate is not that high, the damage is massively increased, so whenever you’re sure to shoot an opponent, it is truly a blast.

Electromagnetic Cannon is a special weapon that is purchasable for 210 coins. It is a sci-fi-inspired weapon that shoots energetic particles that provide reasonable damage. Though the satisfactory rate is slow, it offers a chain-shot trait wherein once an enemy receives damage from this weapon will pass through the enemies surrounded.

Another stunning special weapon that you should buy is the Poison Darts. This weapon is consumable for 585 coins. As the weapon name suggests, this weapon discharges poison darts. What is more incredible about this weapon is that the darts released are invisible.

This weapon is good for its high damage. This techniques makes the opponent slow down once hit. If you aim for more severe damage, you better get this weapon right now.

It is a sniper weapon that costs 1080 coins. It is a railgun where the bullets are charged. The longer you charge the bullet, the more significant damage they can offer. This weapon can scope up to 10 times with instant bullet travel time. This weapon is highly recommended for huge-sized maps.

It is a sniper weapon that you can try for 110 coins. It is a futuristic-themed rifle for a long-range weapon. Though it gives decent damage, it doesn’t mean that one shot can kill your enemy unless it has low armor and health.

What is different with this rifle is that it can fire through walls. Get this pixel gun 3D on one of your gun list today!

Buy this sniper weapon for only 530 coins. It is not technically a sniper weapon but instead a bow and arrow. This weapon can discharge arrows, and once your opponent gets hit, it will affect them in the form of burning, poisoning, or bleeding. Over time, your enemy will lose its health until it dies.

It is a heavy weapon that costs 1410 coins. It is a toy-inspired weapon that shoots bombs that flies up upon release. Once released, the bombs will bounce off into different objects and walls until it hits your enemy. Once the bomb touches your enemy, it will explode massively and create a significant area of damage. If the bomb did not touch any of your enemies, it would still burst on its own.

Deadly Beat is classified as a heavy weapon available for 510 coins. It is a cannon-type weapon that discharges colorful projectiles that offer enormous direct damage against your opponent in a large radius. This weapon features a knock-back effect making your opponents disoriented .

Piranha is a heavy weapon that costs 1700 coins. A rocket launcher shoots up to 6 rockets whenever you hit the fire button. Each rocket release can exceptionally travel fast and can give pretty area damage. If used practically, it will provide loads of damage to your enemies.

So, are you ready to get the best weapon in Pixel Gun 3D? Hope this guide helps you improve your overall gameplay experience in Pixel Gun 3D. Stay tuned here for more information and updates about this FPS action game!

Time Defenders Tier List – The Best Units in Each Class