When talking about RPGs, no doubt RAID: Shadow Legends will always be part of your long list of games. This role-playing game is renowned for its heroic quests, merciless PvP battles, and extensive hero customization that will surely keep you hooked for hours. What’s more exciting about this role-playing game is that it features different game modes and a huge roster of various champions; each hero depicts its own power and abilities. With these overloading aspects, new players tend to be meticulous champions to use to fulfill their role in all facets of the game, so they try to choose the Raid Shadow Legends Best Starter.

The Beginning of the Game

Once you start playing Raid Shadow Legends, you will find a short introduction showing the game’s story. Then, you need to choose your champion who will take the journey in Teleria. There will also be a tutorial where you will be taught how to customize your character exploring the world map, upgrades, campaigns, and your home base. If you are new to this game, it is highly recommended to take the tutorial to understand the game’s whereabouts better. But, in this article, we will focus on choosing from the raid shadow legends starting champions. Though there are only a few choices, all champions given are famous for their great damages and capabilities to surpass you in various battles in the game. 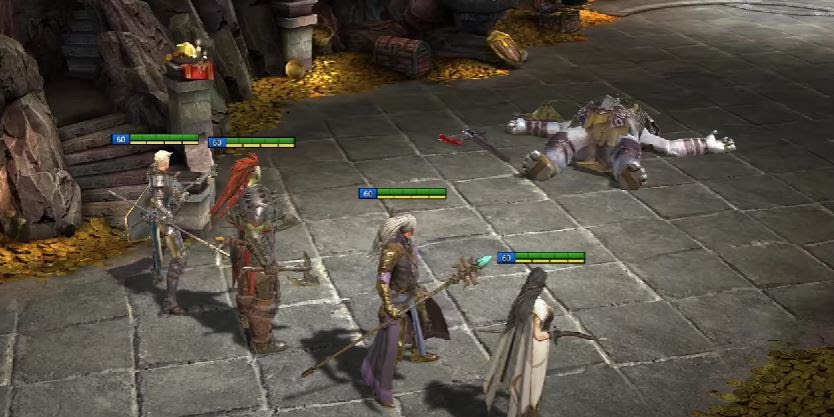 We know that it’s hard to choose among the four champions; that’s why we are here to guide you by giving the significant details of each hero and why you should choose them.

Who is the Best Raid Shadow Legends Starter?

After the cinematic introduction of the game, there will be four champions to choose from, and you need to choose among them your first champion. Understandably, it’s hard to choose your very first champion in-game; that’s why we’ve given you significant information about each character making the choosing task easier. Here are the first set of Raid Shadow Legends Champions;

Elhain is the iconic High Elf Archer in Raid Shadow Legends. This archer is famous for her high AoE damage capability and is flexible enough to deal with single targets. This champion comes from the High Elves faction and is famous as the Magic affinity rare champion because she can defend herself effectively. To maximize her powers and abilities, it is highly recommended to build Elhain as an all-rounder and equally thrived defense and attack. If you are a player that prefers a champion that stands out on accuracy, then Elhain is not for you. Most of the time, Elhain has more advantages from Warmaster Mastery Skill.

Elhain is a minor champion among the four champions because she fails to give powerful debuffs against opponents. But, if you are a player that prefers using archers in battles, this champion is a great choice. She offers keen shots, lightning arrows, and Valley of Death attacks. When talking about battles, her aura escalates the Ally HP by 15%, which is significant to support her in challenging dungeons in the early game.

Galek is the famous orc you mostly see on the promotional poster of the game. He is popular as the sword-wielding attack orc champion that belongs to the Orcs faction and is definitely one of the best Raid Shadow Legends characters. Most of the time, players prefer choosing Galek, but they miss the information that this champion can’t scale well during the late game, unlike Elhain and Kael. Galek is famous for his AoE and single target attacks and consistent damage through its debuffs. 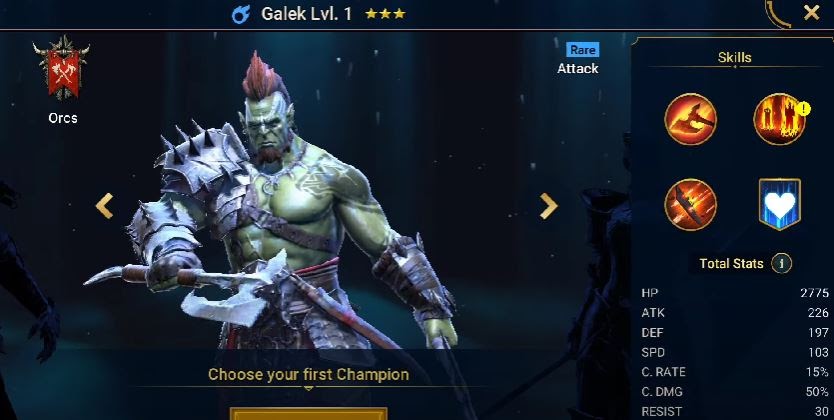 This mighty orc can offer Cross Slash, Hellraiser, and Cursed Blade abilities. Like Elhain, Galek’s Aura can increase all Ally HP by 15%, enough to fulfill a strenuous dungeon.

Renowned as the Paladin of the Teleria, this champion is a perfect choice for the patient players. She is also ideal for those who want to play a paladin in-game. Athel is an attack champion that is a member of the Telerian faction. She has a self-buff, making her feasible in the early game. Among the other champions, Athel has lower damage making players experience some difficulties in the early part of the game though she has a self-buff. She can offer abilities like Strike Down, Higher Blessing, and Divine Blades. Like the champions mentioned above, her aura surged all Ally HP by 15% in all kinds of battles.

Kael is known to be the best Raid Shadow Legends Starter champion. He is a dark elf mage and best renowned as an Attack champion with Magic Affinity. If you are looking for a champion who can successfully sustain all stages of the game, then Kael is the ideal choice. This champion merges a single target, and AoE attacks to defect mobs in various dungeons and also the most resilient bosses. His abilities are dark bolt, acid raid, and disintegrate. Like the other three champions, Kael’s Aura raises Ally HP by 15%, applicable to all battles.

So, do you know now who the Raid Shadow Legends’ best starter is? We hope this guide helps you find the right champion that fits your playstyle and gameplay. Stay tuned for more information and updates regarding RAID: Shadow Legends.