Lunime’s latest entry to their iconic Gacha series is already making waves in the anime community. Formerly known as Gacha Life 2, Gacha Club is the pinnacle of the series combining all the best features of its predecessors. Lunime has managed to infuse the narrative-driven RPG gameplay from Gacha World and Gacha Resort with the fun elements of Gacha Life.

Gacha Club, for the most part, is more than just your typical character creation application as it boasts a plethora of gameplay features and game modes. It’s safe to say that the number of activities in the game can be overwhelming sometimes. With that said, if you are a new player in the game or someone who is planning to explore this fun and immersive game, then, you definitely should check out some of the useful tips below to help you get the most out of your playtime.

Before we jump into the main topic, let’s take a quick overview of the various activities and game modes waiting for you in Gacha Club. This is to ensure that you will have a basic knowledge of the overall structure and mechanics of the game.

Gacha Club features seven tabs located at the bottom of the main interface. The initial tab labeled as “Home” is also the main character creator tab. This tab will allow the player to do an in-depth design, customization, and naming of the character. The tab also comes with an import/export button in case the player decides to share the character.

The studio is a signature feature in Lunime’s Gacha series. This feature allows the player to create scenes using 10 characters. Gacha Club’s Studio comes with a new “Narration” feature that provides a text box separate from the characters.

The units tab is the main character upgrade and team management page. Through this page, players can level up, upgrade, and build their characters. This tab also contains every tiny detail pertaining to the character’s attributes.

The Gacha tab is where you summon new units and pets using your hard-earned gems. This tab comes with a 90% pet drop rate which is why it’s highly recommended to summon units in bulk. Summoning a single unit costs five gems, 50 gems for 10, and 200 gems for 40 units.

The Battle Mode is one of the main highlights of Gacha Club. This tab allows the player to partake in four types of challenges namely Story, Training, Tower, and Shadow of Corruption. Each challenge comes with a unique set of rules and rewards. The best part of this feature is that all four challenges are interconnected, which means that you need to play each one to progress further into the game.

The sixth tab, called Mini-Games, comes with four challenging games with generous rewards. The first game called Lemo and Yuni Dance is a hybrid of Simon Says and Rhythm Game. Mascot Whack, on the other hand, is similar to whack-a-mole. Meanwhile, the third game called Usagi vs Lemo is a point-and-shoot game. The fourth and final mini-game called Memory Match follows the same basic mechanics of a memory game.

Tips To Maximize Your Gameplay On Gacha Club

Playing Gacha Club can be overwhelming especially if you do not have a plan or a program laid out. For casual players, the overwhelming number of activities in the game is a much-welcomed feature since most of them prefer variety to progression. 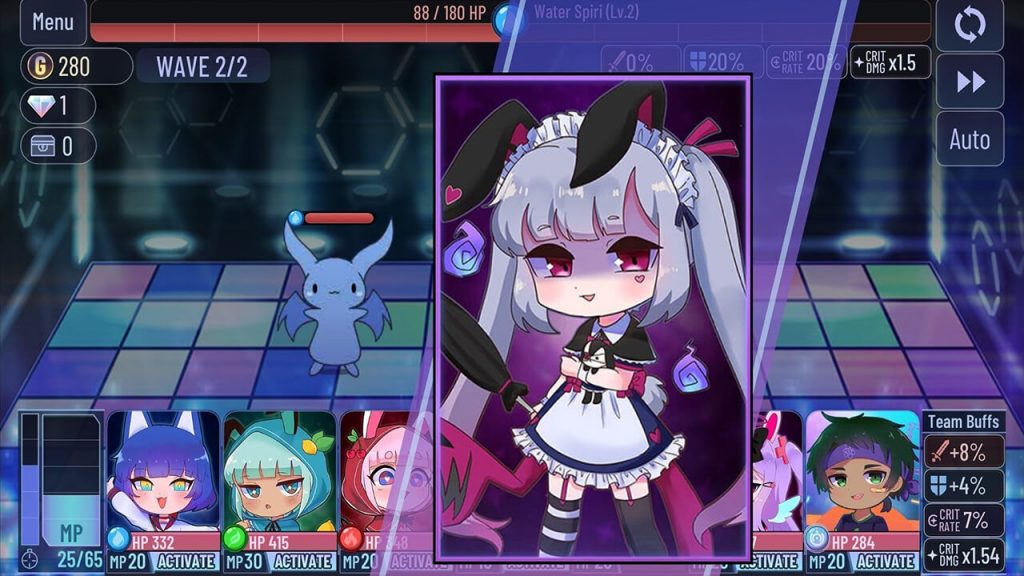 Nevertheless, for players who want to tackle or progress further in the game, being overwhelmed by activities is frustrating, to say the least. With that said, to prevent frustration, you must always have an overview of all the elements that will influence your progression like the ones below.

Knowing where to acquire and use your resources will save you a lot of time in the game especially if you are focused on beating the story mode. Just remember that most of the items you need to level up and upgrade your units are found in the tower and training modes. If you are farming for gems, the best place to do that is by playing mini-games.

Gacha Club will provide you with six types of units—Water, Wind, Fire, Light, Dark, Corrupted, and DJ. Each unit has its own unique skills and attacks. With that said, you must always read or browse through the abilities of your units and plan your upgrades. One of the techniques that you can follow is to prioritize the area attackers for skill upgrades and units with the least HP for leveling up. Doing this will allow you to have a well-balanced team.

Now that you have an overview of the basic tips and overall structure of Gacha Club, the next best thing is to play the game on your PC. Play Gacha Club now!