War games and strategy games are two of the best combinations when it comes to video games. They provide the most entertainment, especially since you always need to be one step ahead of your enemies. And one of these war strategy games is Lords Mobile.

Like any strategy game, you need to have your own army with heroes that can lead you to victory. There are four different types of troops and six different troop formations to choose from, so make sure to plan your lineups, choose the best heroes to lead them, and perfect your strategy to overpower your foes.

The most critical aspect of Lords Mobile is the army. Of course, you need to choose the right one according to your gameplay. But you need to understand the different types of troops and troop formations to help you fully maximize their potential on the battlefield.

The Heart & Soul of Lords Mobile: The Troops

There are many elements that you need to understand when it comes to Lords Mobile. But the first thing you need to do is to look at the different types of troops and the troop formations you can use. You might think that it’s as simple as attacking enemies, but it’s more than that because executing a plan you just devised can be a little more challenging. That’s why it’s extremely important to understand the different troops and troop formations first.

In addition, you also have to choose the best troop composition and hero to lead your army. Of course, if you send the leader with the soldiers during battle, you can earn a little bit more. But you need to think twice before sending them with your troops because if the enemies overcome your army, they will capture your hero. So you need to send your heroes with the squad most of the time because they can help your troops in every battle. 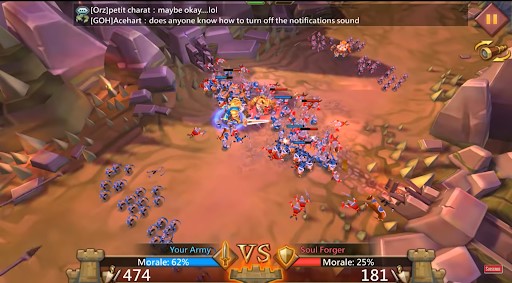 There are currently five tiers for these troop types. The Tier 1 for Infantry is Grunt, Ranged is Archer, Cavalry is Cataphract, and Ballista for Siege Engine. Under Tier 2 are Gladiator for Infantry, Sharpshooter for Ranged, Reptilian Rider for Cavalry, and Catapult for Siege Engine.

The three primary troop types, Infantry can effectively fight against a troop type that’s weaker than them. Once you know the kind of troop your enemy sends out, you need to send an army that counters against them. For example, the Infantry is best countered by Cavalry. So, for Cavalry, you can send out your Range troops. Finally, for Range, you can send an Infantry.

Aside from the different troop types, you will also need to invest your time and energy in different troop formations. This is where you will use your strategy the most. It helps if you place the formation of your troops where you can effectively and efficiently counter the attacks of your enemies. For example, if your enemy has 70% Infantry and 30% Range, make sure to send out 70% Cavalry and 30% Infantry. And since Cavalry is the counter of Infantry, make sure to put them at the front since they are the dominant attackers.

You can find the Troop Formation options at the main right screen under the button where you can change your main hero. The three primary options are Infantry Phalanx, Range Phalanx, and Cavalry Phalanx. In addition, you can also unlock Infantry Wedge, Range Wedge, and Cavalry Wedge. In total, there are six different Troop Formations available for you.

Make sure to create the best troops with the help of this Lords Mobile Troop Guide. Lead your team to battle and reach victory today!