If you’re someone who enjoys playing multiplayer games but prefers a story-based game, then MMORPGs are the genre for you. These games combine multiplayer gameplay elements with the adventure, action, and storytelling of RPG games. One exciting and great MMORPG that you can play is MU Archangel. Published by Webzen Inc., it’s an action-adventure RPG where you get to go on numerous quests to become the best player in the game.

You begin the game by selecting the character that you’ll use and then level up and develop that character. To do that, you complete various quests to earn rewards and equipment. You also gain experience and level up as you fight against monsters. As you level up, you get stronger in the process.

The game sounds simple to play, and for the most part, it is. However, it can still be a bit overwhelming to play, especially for beginners. This is why this blog post will provide a guide to properly playing MU Archangel if you’re a beginner. So continue reading so you’ll know what to do in this game.

MU Archangel has three character classes in the game, Dark Knight, Dark Wizard, and Elf. Each class will have different stats, appearance, and gameplay. The Dark Knight is a melee-type character, which means you battle in close range using a sword. The Dark Wizard is a magic user, a more suited character to tackle enemies from a range. The Elf is also a long-range character but uses bows and arrows instead. This is the first thing you will do in the game, and selecting the right character will be crucial.

It would be best to select a character class that will suit your gameplay more. If you’re an aggressive player who prefers to be in the middle of the fight, then the Dark Knight is the class for you. But if you choose to battle from a distance, then it’s the Elf or Dark Wizard.

After selecting your character, the next thing that you should do is to focus first on the main quests of MU Archangel. The game will actually start you off with the main quest that you can quickly complete. After that, you can start exploring a bit more or playing however you want. But it would be better to continue with the main quest. Not only does it help with your progression, but you also get to unlock more features of the game.

You should try to unlock as many features as you can to really enjoy the game. But aside from the elements, completing the main quests will also help you progress further in the game and develop your character. So, try to focus on them first before exploring around. 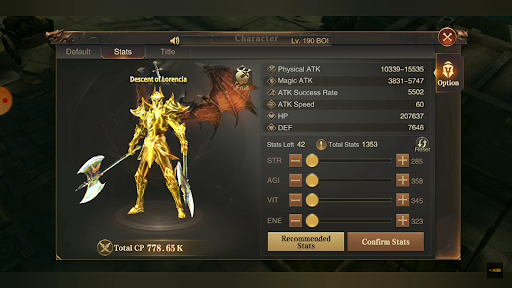 Allocate Properly the Stat Points for your Character

You earn 5 stat points to allocate through 4 stats, Strength, Agility, Energy, and Vitality, as you level up. The proper way to give stats would depend significantly on what role you want your character to play. If your Dark Knight wishes to be tankier, then strength and vitality should be your concentration. If you want more speed, then focus on agility.

It’s also important to note that specific gear will also have stats requirements before equipping them. For the Dark Knight, this is not a problem since you’ll likely be putting more stats on strength and agility, which is the usual requirement for most gear. For the Dark Wizard, this becomes a problem since you’re likely going to focus more on energy to increase mana supply and spell potency. But you still have to allocate certain points for other stats, especially if certain gears you want to equip.

Guilds, clans, or alliances are staples of online multiplayer games, and MU Archangel is no different. And like with other online games, a guild in this MMORPG is more than just a way to interact with other players. Guilds will play a massive role in your development and progression in this game. Though you can still play on your own without any problems.

But with an active guild, you can speed up your progress and development. You can ask for help from more vital guild members to accompany you in more challenging areas. This will allow you to gain tons of experience and rewards. You can also ask questions and guidance from your guildmates. You can learn a lot from players who have been playing MU Archangel for a long time, which can help speed up your progress.

War Robots – A Beginner’s Guide To Playing The Game