TMNT: Mutant Madness is an exciting and action-packed role-playing game. Published by Kongregate, it’s a game based on your favorite Teenage Mutant Ninja Turtle characters. In this game, the multiverse is in danger of being destroyed, and it’s up to you to stop it. Hence, you must assemble the most powerful team to deal with this disaster.

The great thing about this game is that you won’t just use the Ninja Turtles and their friends. You can also use powerful villains to form your team. This gives you a wide range of character selections to acquire and use to form your team. But with many characters available, it becomes a bit more challenging to form your team. You would likely want to use the best characters on your team, but with many different choices, you’d have a hard time deciphering who’s the best. But aside from characters, another way to ensure your success is upgrading your Lair.

There are different rooms available in your Lair, and they do various things like producing resources, adding benefits to your heroes, and so on. You can also upgrade these rooms to further increase the benefits they provide. But with many rooms available, you need to be smart in which room in your Lair you need to prioritize first. To make sure you make the right decision with your team formation and upgrading the Lair, check out this guide. Here, we’ll discuss the best characters currently available in the game and the room that you should prioritize. 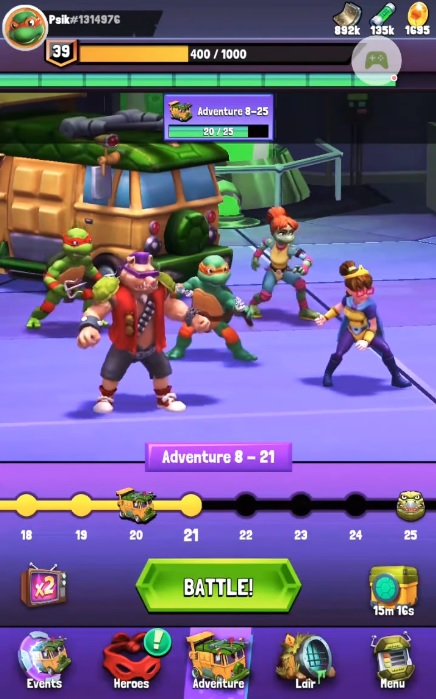 Knowing the best characters in TMNT: Mutant Madness is necessary. This is because you’ll spend resources and time developing and upgrading heroes. So, you must focus your resources on the best heroes in the game. Before we discuss the current best characters in TMNT, you should also know about the six roles that characters can play. These roles are Brawler, Skirmisher, Support, Tank, Blaster, and Trickster.

The Blasters and Brawlers are the attackers of the game, with the former being a ranged attacker and the latter a melee attacker. The Tanks are the heroes that have high HP and will protect your team, while the Supporters are the ones that heal and buff your team. On the other hand, the Tricksters are the heroes that can stun, slow down, or provide other effects to enemies. Lastly, the Skirmishers are very fast characters. Make sure that you balance your team composition by filling it with various roles.

Now, let’s discuss who are the best characters to use in TMNT: Mutant Madness. It doesn’t matter whether it’s the Campaign mode, the Arena mode, or the CH6 Tower mode. They’re all capable heroes to use, regardless of the game mode you’ll play.

The heroes mentioned above are the ones you’d want to focus on developing. And you can see from their roles that you’ll be able to compose a fairly nice team with several combinations available. Of course, this list could change, especially if there’s an update of if there are new characters available. But for now, those heroes should be your focus. 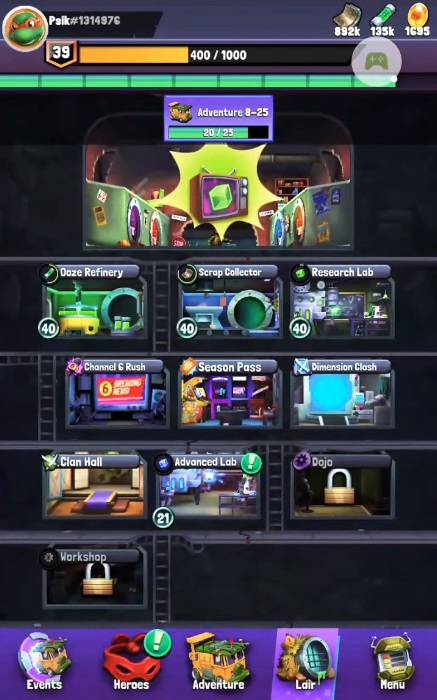 The Room in the Lair That You Should Prioritize in TMNT

Now, let’s discuss the rooms in the Lair that you need to focus on. The Lair becomes available once you’ve unlocked the Headquarters after completing Adventure 2-1. Moreover, there are 10 rooms in the Lair, and each one of them provides a certain benefit. Below are the rooms of the Lair:

From the list above, you will notice that all of them play an important role in helping you out in the game. But the most important room that you need to focus on upgrading first would be the Scrap Collector, which will be unlocked after Adventure 2-5. It produces Scrap, which is the material used to upgrade the rooms of the Lair, so you need to have more of them.

The next room that you should prioritize is the Ooze Refinery (Unlocked after Adventure 1-8). It produces Ooze, which is what you will use to upgrade your heroes. This means you will also need more of them to make it easier to level up the heroes that you have. Once you upgrade these two rooms, you can now choose and upgrade a room that you prefer. They will help you progress quicker in TMNT: Mutant Madness.