AFK Arena Guide – Where To Find The Stores In The Game

Launched in 2018 by Rise of Kingdoms developer, Lilith Games, AFK Arena is a concoction of elements from the idle category, RPG, and squad building games. To elaborate more, this game features strategy-based combat mechanics and character-building elements common to RPGs. The game also comes with the auto-battle element and the generous reward system of an idle or incremental game.

AFK Arena’s reward system is so expansive that it employs multiple currencies and five stores. With that in mind, we are going to take an overview of the items and currencies of each store along with their respective locations in the game. Having an overview of the contents of each store and the type of currency accepted will help you establish your roadmap to progression.

AFK Arena Stores offer a colossal inventory of in-game items, weapons, character cards, and other equipment. Each store has its own restocking schedule and restocking price for those who want to speed up the process. Like most freemium RPGs, you need to have patience when dealing with store restocks unless you have an endless supply of in-game currency. Speeding up the store’s restocking process is the best way to hunt for items. With that out of the way, check out the description of each store below.

The Normal store is the most common in the game. This store accepts diamond and gold currency and restocks at 00:00 GMT. Players can speed up the restocking process of this store for 100 diamonds. Some of the items featured in this store include Hero’s Essence (for leveling up heroes), Crates of Gold, Rare items (Hero Cards, Armors, Weapons), and Common Items (Hero Cards, Weapons, Armors). This store also offers mythic items for players who completed Chapter 10-22. The normal store is accessible in the main store in Ranhorn. 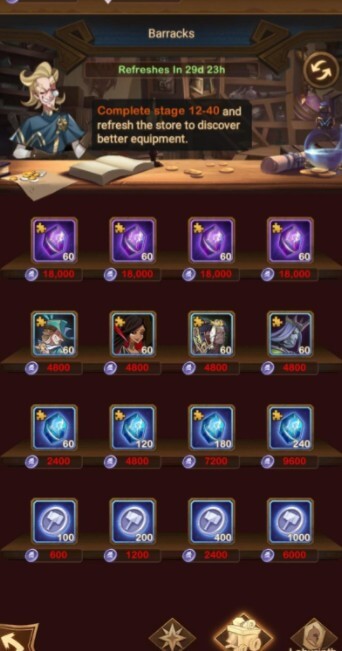 In addition, this store also features hero-specific soulstones which are essential for hero enhancement. The Barracks store restocks once a month and can be refreshed for 1000 Diamonds. This store is accessible from the main store located in Ranhorn.

The Labyrinth Store, for the most part, is more like a grocery store due to its diverse inventory of items. This store requires a special currency called Labyrinth coins which are given as rewards in Arcane Labyrinth boss battles. This store also restocks once a month which can be refreshed in real-time for 1000 diamonds. The Labyrinth Store is the best place to get elite heroes for ascension.

The Guild Store, as the name suggests, requires the player to create or join a guild to access. In addition, the Guild Store only accepts Guild Coins which are exclusive coins earned when participating in guild activities. Guild Stores offers high-end gears since the store will showcase Legendary gears after beating Campaign Chapter 10-22 and Mythic Gears after Chapter 12-2. Players can speed up the restock of this store for 100 diamonds.

Nevertheless, enough Challenger Coins will give the player a chance to purchase the rarest heroes in the game. This includes Merlin, Ezizh, Orthos, Athalia, Flora, and Zolrath. Players can restock the challenger store for 100 Diamonds.

In addition to the stores, the game also features a hero summoning area called the Noble Tavern. Players can also reset the upgrades of their heroes in the Rickety Cart. Resetting a hero will allow the player to retrieve the EXP, Hero Essence, and Gold spent during the upgrade. There are other establishments and locations focused on character-building and trading in the game. Most of these establishments require a specific level to access.

AFK Arena provides endless hours of short-burst fast-paced RPG battles on mobile. Lilith Games did an amazing job in the development of the game. The game’s modest design and easy-to-master controls are enough reason to check out and play this awesome title.

For those who are new to the game, the AFK in AFK Arena is an acronym for “Away from Keyboard.” Nevertheless, the best place to experience or play this game is on your PC. Just click AFK Arena and follow the instructions to download.