Three years after the launch of their biggest title, Finnish developer Supercell unleashed another free multiplayer hit called Clash Royale. More like a spin-off of Clash of Clans, the real-time strategy game comes with troops and structures similar to the aforementioned game. Nevertheless, despite the similarities in units and structures, Clash Royale showcased a concoction of elements borrowed from tower-defense, card, and other subgenres. In a nutshell, Clash Royale is a tower defense/card/RTS/ online multiplayer hybrid built for competitive battles.

Nevertheless, the main highlight of Clash Royale is its multiple game modes. With that said, let’s take a quick overview of each of the available modes featured in the game. One thing that you should take note of is that this game comes with a trophy system called Trophy Road. Just like Clash of Clans, trophies influence your progress in the game since you lose some if you are defeated, and then win some if you are victorious.

What is Trophy Road?

Trophy Road is your in-game progression roadmap. This element allows you to track down your progression using your trophies earned in battles. Trophy Road displays all the rewards and arenas on your main interface. The number of trophies earned will be tallied at the end of each month and will determine your rank.

The reset will allow you to keep a specific percentage of your trophies depending on your rank (Challenger, Master, Champion, Grand Champion, Royal Champion, and Ultimate Champion). The current ranking system allows Challengers to retain 50% of their trophies, 60% for Masters, and 70% for all Champions. With that out of the way, let us proceed to the game modes.

There are multiple game modes that you can try out in Clash Royale. Each mode comes with its own set of rules and mechanics. Check out the list below for more details.

As the name of the mode implies, the Training Camp allows you to battle against AI-controlled units. This game mode also serves as the main tutorial for new players in the game introducing them to the mechanics and rules in the arena.

Training Camp is not affected by the trophy system and does not come with chest rewards. The training camp is accessible through the menu button located on the top right corner of the main menu interface near the Gem counter. Just click the button and select “Training Camp” on the options menu. 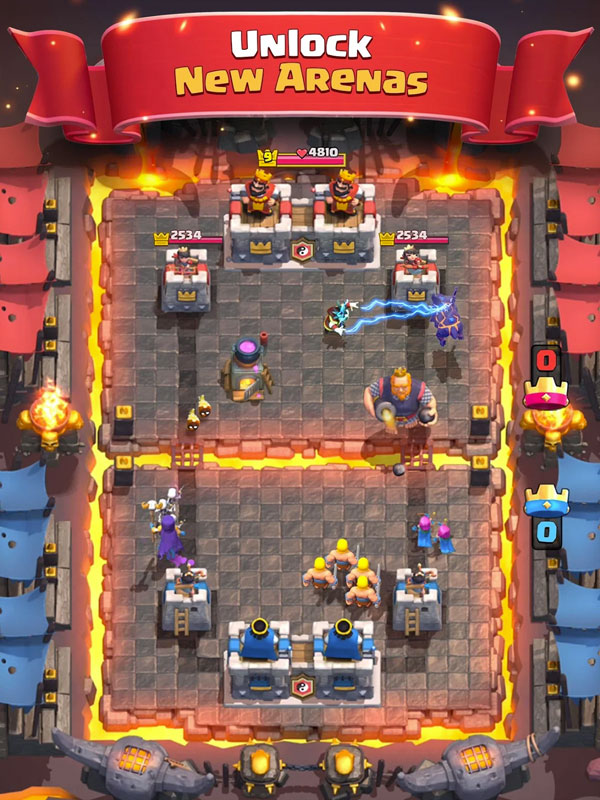 Next, the 2v2 game mode allows a team of two players to engage in battle against another team. This mode is accessible through the “Party” button located on the main menu. You can play this mode with your friend, clanmate, or a random player in the game. The best part of this mode is that it comes with all the basic rewards minus the risk of losing trophies. Special Event Challenges and Friendly Battles both feature this mode.

Just like the Training Camp, Friendly Battles does not provide rewards and will not affect the trophies of the player. This mode will allow you to engage in friendly battles against your clanmates or your friends in your “Friends” list. This mode employs the use of the main Tournament Rules and capping. This means that all card levels are matched to ensure fair play. This mode also allows non-participants to watch live Friendly Battles by clicking the “Spectate” button.

Heist is a game mode exclusive to Special Event Challenges, Private Tournaments, Party Mode, and select Clan Wars Collection Day season. This game mode is a homage to the global launch of Brawl Stars. This mode places a single tower in place of the King’s Tower. Players must destroy the aforementioned towers to win the match.

The Touchdown game mode is another Special Event Challenge exclusive that also appears as one of the rotating game modes under Party. This game mode replaces crown towers with end zones. Each of the opposing teams must reach the end zones to earn crowns. Each battle lasts for three minutes and whoever has the most crowns wins. In case of a draw, the game will provide additional two minutes to break the tie.

Lastly, the Tournament requires XP level 8 to participate. This mode allows players to battle against one another for cards and gold. There are multiple tournaments featured in Clash Royale. The first one is called Victory Challenge that features Classic Challenge and Grand Challenge. Victory Challenge comes with an entry fee of 10 Gems for the Classic and 100 Gems for Grand.

The second type of tournament is the Special Event Challenge. This challenge comes with special rules and is time-limited. Then there’s the monthly Global Tournament that employs the use of Special Event Challenge rules in place of normal rules. Global Tournaments allow players to accumulate wins in exchange for one-time rewards and Global Leaderboards rank-dependent extra bonuses.

Now that you have the basic knowledge of the various game modes that you can play in Clash Royale, the next best thing to do is to download and play this highly competitive game on your PC. Get Clash Royale for free here at EmulatorPC!