War is one of the worst things to happen to a country or a region. It causes millions of innocent deaths, both children and adults. Because of that, the government and the military have to do their job to bring normalcy back to everything. Just because the war is over, it doesn’t mean that their job is done.

Things are led to destabilization after a war, and it’s the job of the government and the military to stabilize things again. Unfortunately, you’ll need to deal with the insurgency. Are you ready to take on the challenge and learn from this Rebel Inc. review?

Rebel Inc. is all about rebuilding one’s nation after an international conflict. You’re the leader of the pack, and you have to roll out operations to deal with the insurgency while you get things back to normal. It won’t be easy, which is what makes this game so exciting. Developed by a one-man developer called NDemic Creations, you’ll love the gameplay.

It’s been on top of the charts for many years for a reason. A spiritual sequel, where you’re on the good guy’s side while playing on a board-game-style map and branching development trees. It’s more compelling compared to the previous game Plague Inc. But is Rebel Inc. any good?

The gameplay is nothing ordinary. It can be confusing at first, which is why the How to Play menu is there to help you out. The developers want to make sure that you know how to play the game before even diving right in. So it’s best you follow the tutorial so you can understand the scope of Rebel Inc.

But it basically starts with your balancing the military and civilian initiatives. That means you need to roll out operations around the region automatically. Once you give the order, your subordinates will make it happen. At first, the effects of your orders can be very confusing as they’re rolled out sector by sector. 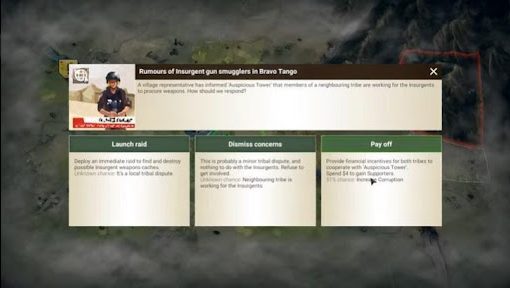 However, you’ll appreciate the improved roads you have put down once your army has to run from one region to the next to take down the insurgent group. Just remember that your overall goal is to stabilize the country, so you need to gain the trust of your people and have an excellent reputation. So you’ll need to do some things for them too, such as fixing their water supply to make them happy again. As you increase your initiatives, the more supporters you’ll have.

The government in Rebel Inc. is just like any other government; they’re at risk of corruption. So you’ll need to start establishing government operations to begin dealing with the corruption within the system. At the same time, you’ll have to deal with the many insurgent groups, so you’ll need to juggle your tasks accordingly. The goal is to trap and eradicate the insurgents with your military unit. But you’ll be spending money, which is another factor to take into consideration.

The costs of the operations and initiatives are measured in dollars and by inflation and increasing corruption. You can’t simply pour money into ailing nations because it will cause prices in the region to rise. Plus, implementing new programs means you have to put undesirable people in charge, which allows them to skim some money off the top. So you’ll need to balance the budget, inflation, corruption, reputation, insurgency, and stability in this game.

The Dilemmas of the Game

Every game has its ups and downs, and Rebel Inc. is one of them. These dilemmas will appear and will require careful judgement. It’s all because one wrong move will cause more significant problems in your regions. Some examples are trading costs in dollars for a change in reputation, a risk of adding more corruption if you can afford it and emboldening the insurgents. There are many instances that these will happen in the game. For example, do you bribe the warlord or arrest him and risk him joining the insurgents? More of these will appear as you continue to play. 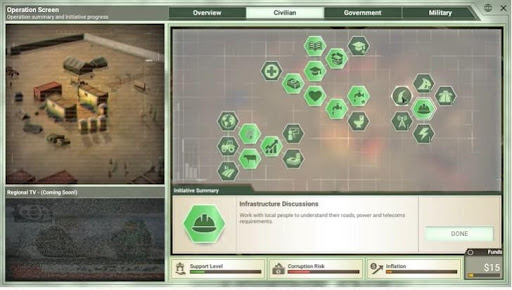 The dilemmas are how you handle issues such as civilian casualties from airstrikes. Do you cover it up or admit that it’s your fault? These happen in real life, which is why you need to think about these before passing judgements and making decisions in the game. Ultimately, you’re brought to the endgame, where you’re forced to negotiate with the rebels to bring peace and harmony to your seven regions.

The overall key to success is the government initiatives, which can help curb corruption, speed up the implementation of civilian initiatives, and make other tools more effective. But you won’t notice the importance of these since you’ll be too busy with the military situation. But once you get the hang of it, Rebel Inc. offers a lot of challenges, which still keeps you on your toes as you face more challenging levels and maps. And if you’re a pro, it’s easier for you to manage these problems in the future.