The Ants: Underground Kingdom offers a new and improved concept like no other. The game’s developer, StarUnion, made sure to provide exceptional city-building gameplay, all revolving around the lives of ants. That’s why this strategy game stands out among the crowd as it gives you something new to explore.

In addition, it’s genuinely entertaining, making it an excellent addition to both the city-building and strategy game genres. But most of all, it has a plethora of features and content that makes The Ants an exciting game. Therefore, it’s indeed playable for a very long time.

What The Ants: Underground Kingdom Gameplay is About?

Whether you like city-building games or not, The Ants: Underground Kingdom is a beautiful game that has tons of exciting and cool features. The gameplay revolves around you developing an ant colony of your own. The introduction starts with the Ant Queen building and looking for a place to grow her colony. Once she finds a place, you need to build your colony around the Queen. Then, she will lay eggs, which becomes the first batch of Worker ants. Finally, they will work to expand the tunnels and produce everything that’s needed in the game from there forward. 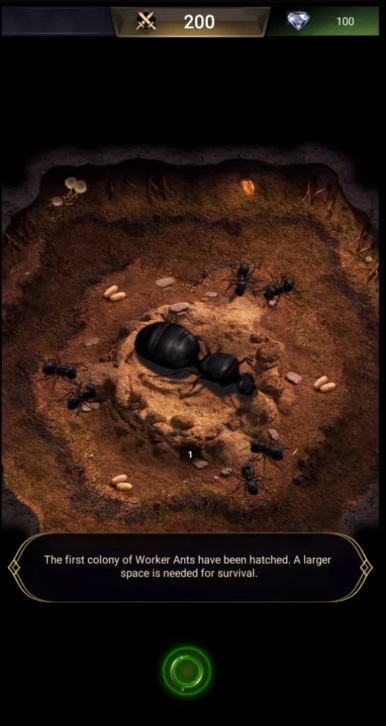 Once progress has been made, you can upgrade every building that’s been made. In addition, you can upgrade the Ant Queen. Thus, you get to progress and make better buildings in the game. However, you’ll only need to upgrade those that are important since the upgrades have different effects. For example, some upgrades allow you to obtain and house more ants. On the other hand, certain upgrades will enable you to speed up production times. Other upgrades also provide more money and resources.

Not only will you enjoy the city-building, strategy, and simulation experience of The Ants, but you’ll also love its multiplayer campaigns. It features both cooperative and competitive multiplayer, making it more action-packed and exciting. For example, players can forge alliances with other players. Therefore, allowing them to communicate and assist each other in many different ways.

Here’s another example. You can request help from your guild to help speed up the wait times of certain buildings that you upgraded. That way, you and other players can send and receive gifts containing various items and even money.

During competitive mode, you can instruct your ant troops to go above ground and attack ant hills that belong to other players. If you successfully attack these anthills, you’ll win a lot of rewards. So if you want to win, you’ll need to choose the right type of ants and upgrades you have within your army. You can unlock more ants the more progress you make.

Drawbacks in The Ants: Underground Kingdom

The overall gameplay is great and has a lot to offer. But it also suffers in quality when it comes to pay-in-advance options. You’re not forced to spend real money on The Ants: Underground Kingdom, but many players feel the need to do so because of the longer build times. Aside from that, you can use the cash to get better items. Although it may not be a huge problem at first, it can still be annoying after the first few chapters because ads show up nearly every time. So they will want to pay to get these ads off. 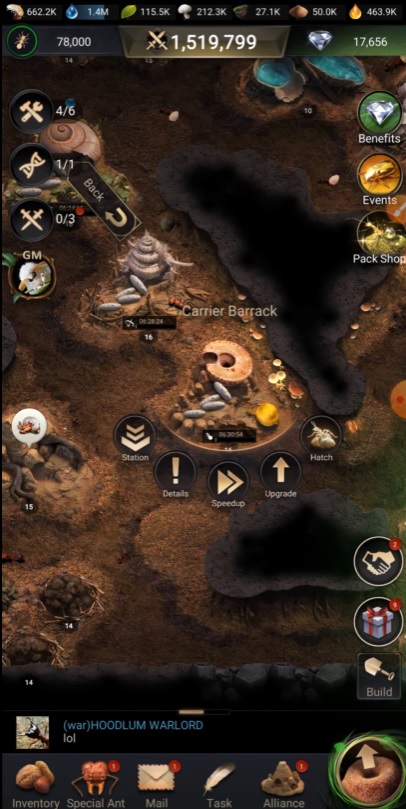 When it comes to the competitive part of the game, those who are playing against each other will have a problem. For example, those who don’t choose to spend money will have a disadvantage against those who have money to spend on as they can unlock better ants and items. It can get lopsided very quickly, which means those who spend on the game will always have the advantage.

Another disadvantage of the game is that players notice how long it is to get to the real game. The first few chapters are like tutorials, where the game almost entirely rails on. After that, the player doesn’t have any freedom anymore, not until they’ve reached the fifth chapter.

Despite its flaws, The Ants: Underground Kingdom still has a lot to offer to players. With its excellent graphics and sound effects, the game is exciting and fun to play. This strategy game is also realistic, allowing players to experience what it feels like to be part of an ant colony. Thus, you are guaranteed tons of content and hours of entertainment with this game. For this The Ants: Underground Kingdom review, we rate the game a 7/10.