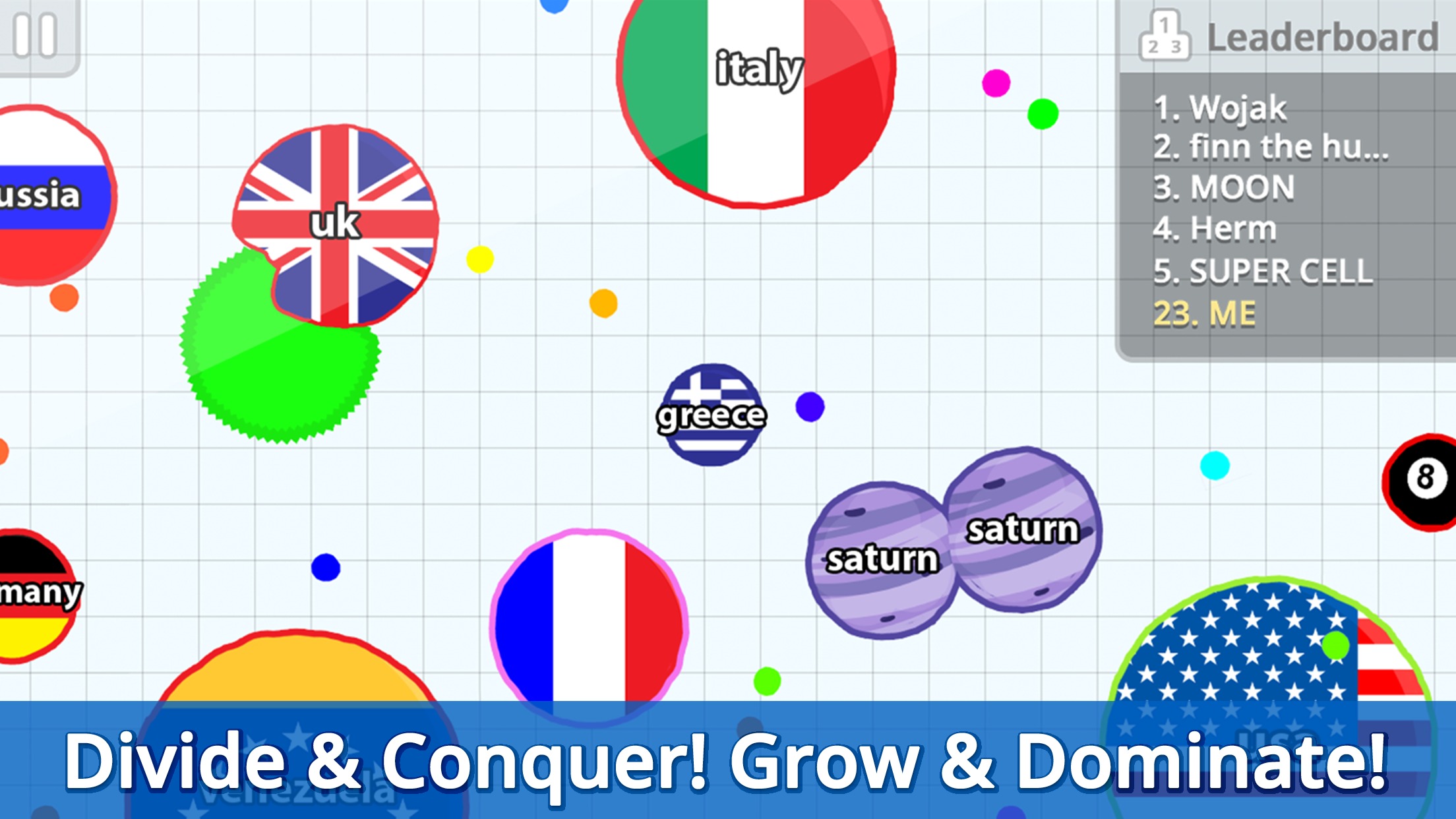 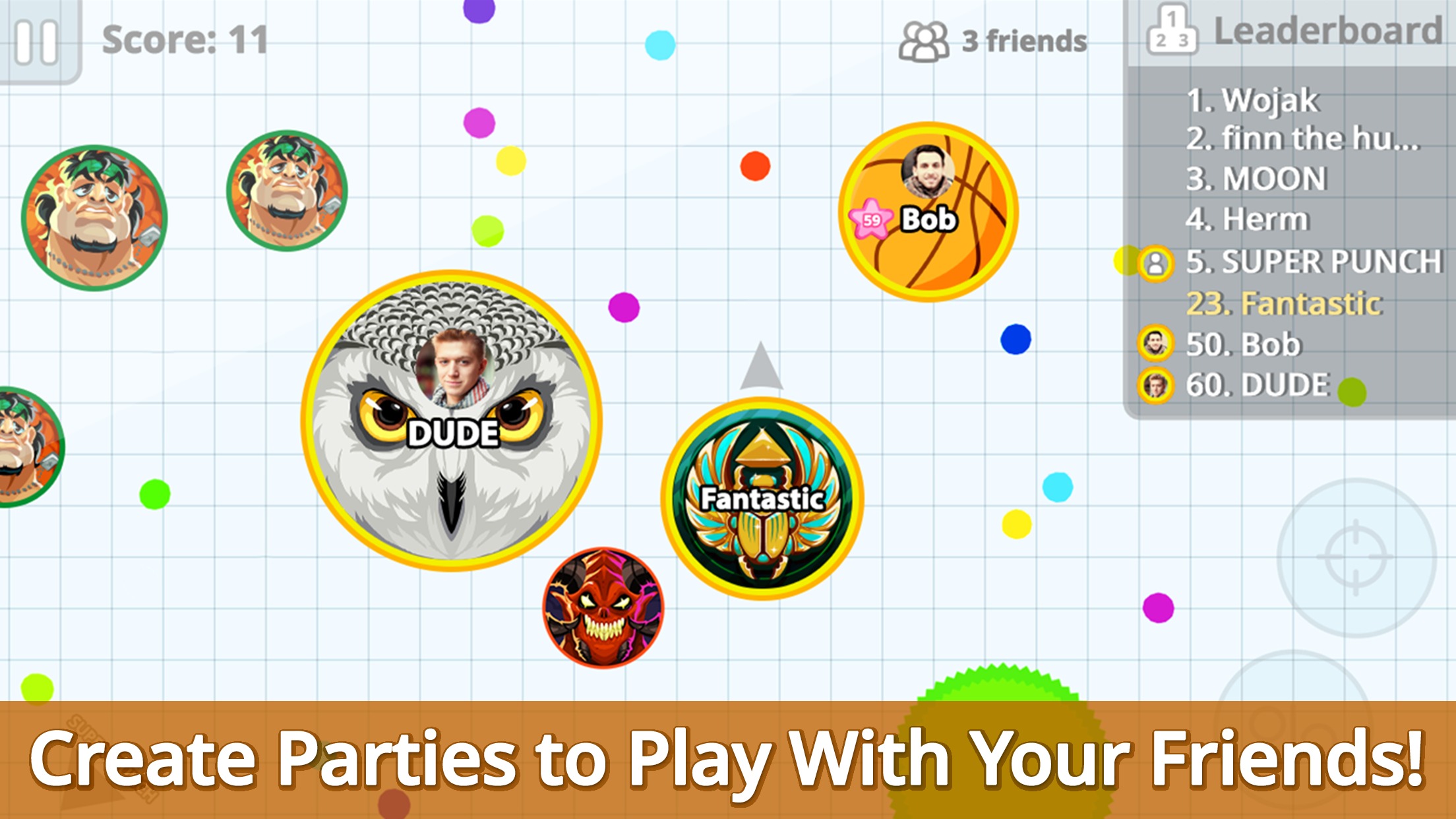 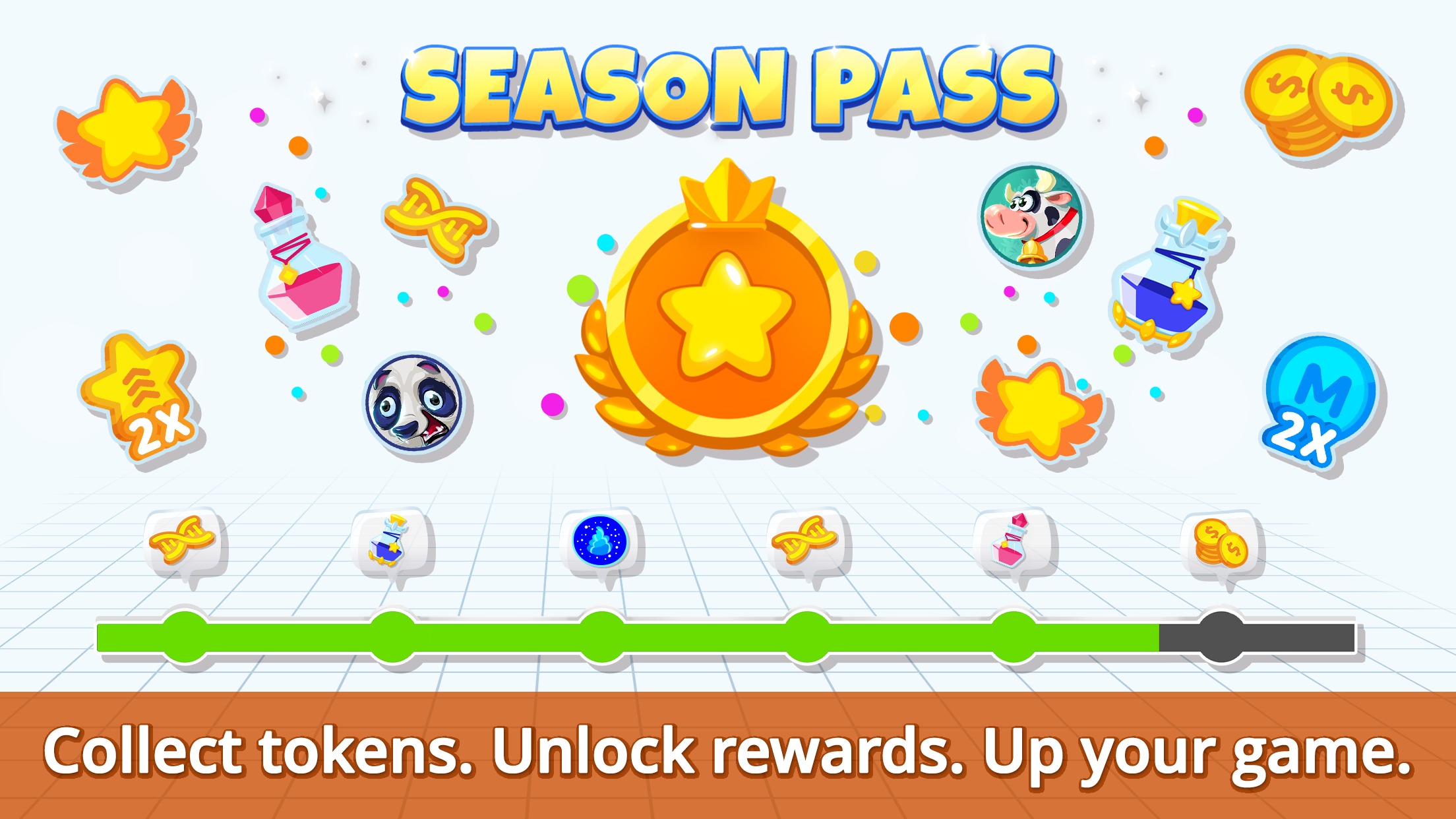 You may have already played Snake and Worm io, so now it is time to try Agar io. In this 2D action game, you will be thrown into a wide multiplayer arena where your goal is to survive as a single live cell. Start as a teeny tiny dot and eat your way up towards becoming the largest cell in the arena.

Agar io works similarly with that of Snake io and Worm io. Players start as a small creature in the game, but as it eats more food (other players), it grows larger and larger until it becomes the biggest cell in the arena. However, things are not that easy.

While you have to make sure that you get big enough as a cell, you should also avoid becoming someone else’s snack. Yes, all the other players are also out to eat you. It’s hard, especially if you are still one of the smallest cells around. But once you become bigger, it’s the other players that should watch out for you.

Agar io Miniclip game is one of the most popular 2D action survival games along with Snake and Worm io. The game was first played as an online web game, but it has since been developed into a mobile game for Android and iOS devices. PC players can also download the Agar io unblocked game app for convenience here at EmulatorPC.

Eat or be Eaten: Try to Survive for as Long as You Can

Eating and surviving is your main mission on the Agar io online game. The game will last as long as you keep surviving. Like a small cell, you should only eat the other cells that are as small as you. Bigger cells can eat all the other smaller cells too. But when a larger cell comes along, it could become an easy snack.

Playing Agar io unblocked on PC gives you the ease of navigation and eliminates potential problems such as crashes and lags that usually cause players to lose the game. One of the most important survival tactics on Agar io is to navigate quickly away from bigger cells and viruses, while also being quick enough to catch on food or pellets. Playing the game on PC will give you this primary advantage. By then, you only have to use other strategies to help you survive longer in the game.

If you want to play Agar io online with your best pals, you can invite them and play on Party Mode. You can play this game if you just want a friendly session with family and friends over the weekend or during lazy afternoons.

If you want a more competitive gameplay, you can play on Battle Royale Mode. In this mode, 20 to 40 players are allowed to compete against each other on one server. Moreover, players are forced to survive in a safe area until it slowly shrinks. Survival becomes more difficult as the safe area reduces because it will be harder for each player to avoid bigger cells or find food for that matter.

Download or Make Your Own Free Skins in Agar.io

Players can have extra fun with their unique skins. There are plenty of free skins in Agar.io that players can use, but there are also tons of premium skins too. Players can customize the color and designs of their skins. It could just be a plain-colored cell or a multi-colored one with lines and patterns. It could also be designed with flags, illustrations, masks, and so much more.

Develop Your Strategy to Conquer the Agar io Arena

There are several ways to survive and become one of the largest cells in Agar io unblocked. If you have quick reflexes or if you can navigate around the multiplayer arena with ease, this can help you survive longer in the game. However, swerving and avoiding other players will not always work out to your advantage, especially if there are bigger cells around the arena.

There are at least three known strategies that are also used by long-time players of Agar io. These are splitting, shrinking, and dodging. Each strategy has a different effect, and it requires proper timing to maximize its rewards.

Splitting allows you to divide your cell into several parts. This only works if you are already larger than the majority of cells in the arena. However, you have to be careful because the other cells can easily make a snack out of one of your split parts.

However, the advantage of splitting is that you get to cover a wider space and eat as many pellets and smaller cells as you can. Just make sure that before you do split your cell, there are no viruses and big players that are near you.

If you’re looking for more action games to play, feel free to check out Soul Knight and Supreme Duelist Stickman. These games are all free to download and play on PC when you get them here at EmulatorPC. 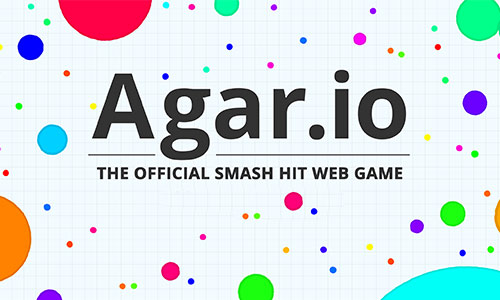 All Agar.io materials are copyrights of Miniclip.com. Our software is not developed by or affiliated with Miniclip.com.