If you are looking for a fun multiplayer strategy game, then you should consider downloading Lords Mobile on your PC. It’s a war game that’s published by IGG.COM. Here, your goal is to build a powerful kingdom and become one of the best players in the game. But doing this won’t be easy as there are a lot of factors that will determine this. But it will be very fun to try.

You can expect that this game will involve a lot of building, researching, and training units. Your success will also be determined by the people you’re going to ally yourself with. To help you understand how to properly play Lords Mobile, proceed to the next section where it’ll be discussed.

Building An Empire in Lords Mobile

There’s going to be a short battle tutorial to start Lords Mobile on PC. It will just show you how the battle sequence works and not teach about it. After completing the attack on a base, you will start learning about building structures. Each building will have a function like training troops, summoning heroes, researching, defending, and so on. You will learn about upgrading buildings, which will open up more functions and also strengthen them a bit.

The tutorial will also teach you about quests and missions that you can complete. You must accomplish as much as you can since you earn resources for doing so. Resources are important since you will need them for building, upgrading, researching, and training troops. After that, you will also learn about forming your army, summoning heroes, and attacking bases. It will also let you experience quests and missions with your heroes.

The tutorial will teach you all of the basic things you need to learn about playing Lords Mobile. Once you’ve completed it, your next step is to join a good guild. Guilds will play an important role in your success in Lords Mobile. By being part of one you will have allies that can protect you from other players. You can also earn more rewards from your guild, as well as learn more from established players.

The Main Features of Lords Mobile

Enjoy more awesome video games you can play using our EmulatorPC app. Get access to titles like Guns of Glory or Heroes Arena. Enjoy gaming at its finest by playing games on PC! 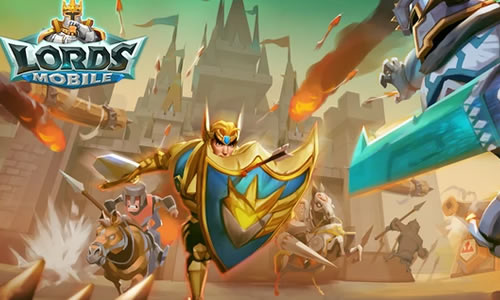 All Lords Mobile: Kingdom Wars materials are copyrights of IGG.COM. Our software is not developed by or affiliated with IGG.COM.